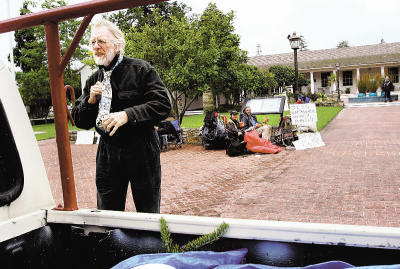 Homeless Civil Rights Attorney Ed Frey prepares for court at City Hall while taking part of a protest against Sleeping Bans as part of Peace Camp 2010. Frey drove a porto-potty to City Hall at 8PM each night and pulled it away each morning at 8AM in order to facilitate the ability of homeless people to sleep. Peace Camp 2010, in its 3-months of existence provided over 1,000 shelter nights for homeless people who did not or could not fit inside existing shelter space. Frey was sentenced to 6 months in County Jail on June 10, 2011 by Judge John Gallagher. Photo by Shmuel Thayer of the Santa Cruz Sentinel.

Santa Cruz, Ca. -- Houseless civil rights worker, Gary Johnson, and his attorney, Ed Frey, began serving a 6 month term in Santa Cruz County Jail. Gary for sleeping 4 times in a 3-month period, and Ed for having slept three times. Twice on the steps of the Santa Cruz County Courthouse, and once on the bricks at the edge of the plaza at City Hall, a stones' throw from Mayor Ryan Coonerty's office. Both slept out in violation of the Sleeping Ban which outlaws the act of sleeping within the City Limits between 11PM and 8:30AM out of doors or in a vehicle.

Of course only homeless people are every charged with "criminal" sleeping. It is not a little-enforced law, either. MC 6.36.010 a and it's twin, the "Blanket Ban," MC 6.36.010 section b, are cited about 60 times a month within the City limits by police and by Parks and Rec Rangers.

How the City expects to "teach" homeless people to not sleep at night or to not use a blanket at night is never discussed. When Gary Johnson, at his sentencing hearing told Judge John Gallagher, "I can't go three years without sleeping," Gallagher punitively sentenced him to six months in jail for sleeping four times in 90 days. "You can sleep in jail," Gallagher told him.

Does Judge Gallagher and the DA Bob Lee expect to turn our county jails into homeless shelters? Indeed, they apparently already have. And those who were marginally housed at the time of jailing will become homeless as well, once they lose a job or can't make their rent. I call this Lose-Lose public policy. Prohibitively expensive homeless "shelters" plus cranking out MORE HOMELESS by the day.

ED tells me that his attorney, Peter Leeming, has scheduled a motion to reconsider sentencing at 8:30AM in Dept. 2 before Judge John Gallagher. Supporters are encouraged to attend.

ED says that his family is experiencing severe financial distress as the result of his jailing, and are seeking donations to prevent their own homelessness. In addition to ED's sudden jailing, his wife is helping to care for two newborn grandchildren, the youngest born while ED was in jail.

Gary Johnson is also scheduled for a hearing at 8:30AM in Dept 2.

Ed reports that Santa Cruz County Jail is overcrowded, with very little floorspace in which to walk around. People sleep in "boats" which are pulled out at night and placed in common areas. He has spoken with dozens of prisoners, a great percentage are homeless or will be homeless upon release. The law library at the jail has been closed and the books he ordered for his own defense have not yet arrived.

He has since been transferred to the Rountree Facility in Watsonville which he describes as "a country club" compared to SCCJ. "We play ping-pong and watch television. There is much more room to walk around in and the staff are more relaxed."

Ed Frey has asked for legal support to file an appeal and for financial support to help his family survive their loss of the main breadwinner. He is seeking a sentence modification to time served.
Posted by Becky Johnson at 5:44 PM