GREAT NEWS! I just heard that Gary Johnson was released yesterday afternoon from the Rountree Minimum Security Facility in Watsonville, Ca. where he was serving a 6 month sentence for the "crime" of sleeping as part of a protest against the Sleeping Ban in the City of Santa Cruz. His attorney and co-defendant, Ed Frey, was freed Friday, June 24th when Judge John Gallagher reduced his bail from $50,000 to $110. Gary, in addition to 5 days in jail prior to sentencing, was incarcerated from June 10th until June 27th, or for a total of 22 days for the "crime" of sleeping. Here is Gary's e-mail to me. --- Becky Johnson- ed 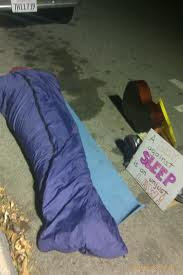 Gary Johnson sleeps non-obstructively August 28, 2010 on the downtown sidewalk outside of City Hall after the City pronounced "no trespassing" restrictions on public property during Peace Camp 2010, a protest against Santa Cruz' Sleeping Ban. Photo by Becky Johnson