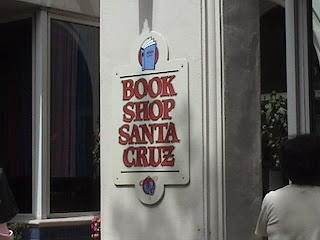 Santa Cruz, Ca. -- Here's the deal. I wrote an e-mail to then Vice-Mayor Ryan Coonerty to complain about his polices on homelessness. More specifically I complained that the Santa Cruz Police Department Press Relations designee, Zach Friend, had said malicious and unfounded statements regarding the behavior of those involved with HUFF's "Homies for the Homeless" protest at City Hall in August of 2007. The reason I wrote Vice-Mayor Coonerty instead of Mayor Emily Reilly is that Ryan had volunteered to be the point person on the City Council to deal with issues involving homelessness.

A very damaging article had appeared in the Santa Cruz Sentinel regarding our 6-day protest/sleepover at City Hall the day before. In that article, Friend had accused homeless protestors with vandalism, harassing a female nighttime janitor, openly using drugs, smearing feces on the bathroom wall in the mens room, and of having sex in a recycling area. 6 citations were issued at the protest. They were ALL for illegal sleeping and none for drug violations, harassment, or lewd behavior. Robert Norse immediately filed a public records request for all records, memos, citations, complaints, or witnesses to any and all violations named by SCPD PR rep. Zach Friend. The request turned up nothing. Friend simply said he'd gotten the information in anectdotal conversations he'd had with City Council office personel. No formal complaints had been filed. No witnesses had come forward. That is when I wrote the following e-mail:

This is a comment from one of your constituents who, like you, support arresting homeless people for the acts of sleeping at night and for covering up with blankets. You, and your police spokesman, Zach Friend, are demonstrating bigotry, hostility, dehumanization, demonization, and are inspiring vigilante justice against those folks who, because they lost their housing, are on the streets. You might not use the same language as this anonymous poster, but your policies are the same. The Sleeping Ban is illegal under the Jones Decision of the 9th Circuit Court. It is cruel and unusual punishment to deny a person who is unfortunate enough to have lost their housing the ability to sleep at night or to stay warm with a blanket. Note that the last line of his message summarizes the exact police policy for the City of Santa Cruz.

You are no better than this constituent of yours.

I ENCLOSED A COPY OF THIS COMMENT WHICH I COPIED FROM THE TOPIX FORUM BELOW THE SENTINEL ARTICLE IN WHICH ZACH FRIEND ACCUSED HOMIES FOR THE HOMELESS OF OPENLY USING DRUGS, HAVING SEX IN A RECYCLING ENCLOSURE, AND OF SMEARING FECES ON THE MEN'S BATHROOM WALL:

These vile pieces of garbage that are taking over the city need to be shown the town line. We need someone in office whose sole platform is to rid SC of every vagrant beggar scum.

It's unreal they call these subhumans "activists" in the article. They are nothing more than professional bum, homeless by choice pieces of crap.

The other amazing this is that this "city" let the festering pustules stay at city hall for the time they did. They should have been ticketed within 5 minutes of setting up camp, asked to leave immediately after being ticketed and if they refused gotten a billy club to the head and a one way ticket to jail.

WE the people need to make it so uncomfortable for every vagrant in SC that they flee for somewhere else.

I find it hard to believe that you could seriously consider comparing my position on homelessness to the hateful comments below. In my time on the council, I have consistently supported increased funding for social services (even in difficult economic times). In my family's business, as your literature points out, we go far beyond any other business downtown in providing bathrooms and a place to sleep for the homeless population, not to mention donations to the Homeless Garden Project, the Homeless Services Center, etc. I volunteer once a month to bring food to the shelter through the Mazon Project at the Temple.

While I fully support your and HUFF's right to First Amendment activity in the community and in front of Bookshop, you should know some of the possible impacts. Since your protest has begun, our bathrooms have been repeatedly vandalized, including shoving clothes down the toilets, smearing excrement on the walls, and cutting the straps from the baby changing table. As you know, maintaining these bathrooms is difficult and expensive and increasing the costs will likely lead to the business having to close them. While I don't think you or HUFF is directly responsible for these acts, I do believe that by connecting my sister's business (I work 20 hours a week there and receive a small salary) to my council acts, you create a climate where people think an act against the bookshop is a political act.

Because of this, I want to make clear that you and Bernard (Robert already is) are permanently banned from stepping foot in Bookshop Santa Cruz. If I, my sister or one of our managers see you enter the store, we will have you arrested.

PS If you reprint this letter, have the courage to reprint it in full.

Ryan Coonerty thinks that volunteerism, some dollars for social services and token examples of "allowing" a few homeless people to sleep on BSSC doorstep in violation of the Sleeping Ban (which is being ruthlessly enforced citywide against literally thousands of people) gives him a free pass for these anti-homeless policies and practices. He is responsible for SCPD's Zach Friend's smear job against the Homies for the Homeless protest at City Hall. He should either refute Friend's claims or investigate them. His silence is complicity.

But, in fact, he chooses to add new claims ---that vandalism done to his sister's(!!) bathrooms (shoving clothes down the toilets, smearing excrement on the walls, and cutting the straps from the baby changing table) is somehow HUFF-inspired.

What is more true is that if the Coonerty's and other city leaders would open up enough bathrooms for the people here who need them, their store wouldn't be so impacted.

HUFF has never advocated nor incited others to commit either violence or vandalism against any individual, business, or institution. We condemn those who have done so, and are unaware of any act of violence committed against Bookshop Santa Cruz by any of our members. HUFF has always used open lobbying, protest, and nonviolent civil disobedience as methods to achieve our ends. Coonerty's solution? To ban Robert Norse, Bernard Klitzner, and myself from using his "sister's" restroom. (Can a part-time employee do this without cause? hmmm)

Zach Friend called a hopscotch board "vandalism". He and City Staff cooked up the feces-smearing incident that no one at the protest saw. They cooked up the "sexual harassment" claim and the "sex in the recycling area" and the generic "drugs" claim for the use of medical marijuana on the same steps where earlier the City had overseen bags of medical marijuana dispensed to patients. No citations were issued for public defecation, lewd behavior, harasment, vandalism or illegal drug use. Yet Coonerty let the comments stand.

The City has surveillance cameras at City Hall which the protesters knew about and left undisturbed. These claims by SCPD seem highly suspect and are bound to incite an anti-homeless backlash as we saw in the Sentinel comments on the article containing Zach Friend's charges. Homeless people will be harmed by those who take it on themselves to "rid" Santa Cruz of a class of people they characterize as "subhuman."

The final line in the anti-homeless bigot's post said this: "WE the people need to make it so uncomfortable for every vagrant in SC that they flee for somewhere else."

Isn't this exactly what Ryan Coonerty's Sleeping Ban is meant to do? --- Becky Johnson of HUFF

I attempted to reach the Vice-Mayor by phone at his home (which he gave out as a publicly accessible number) at 831-429-8939, but failed to be able to do so. He has not returned phone calls from me for the last few weeks. I urge people to NOT vandalize the bathroom facilities he keeps open for the community, if anyone angry at Coonerty's support for the Sleeping Ban is doing that.
Posted by Becky Johnson at 5:40 PM