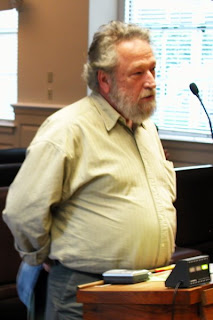 MARCH 22 2009 UPDATE: This article can be viewed where it was originally published at:
http://www.thestreetspirit.org/August2005/labor.htm
Since this article came out, the 9th Circuit Court of Appeals found a similar law in Los Angeles illegal due to "cruel and inhuman punishment." The crux of their decision rested on outlawing sleep in a situation where inadequate shelter exists. As of today, the Sleeping Ban is still in place and supported by the entire City Council. The HRO is still holding meetings. But they are now held at Taqueria Vallerta downtown at 2PM every Saturday. ---Becky


Santa Cruz, Ca. -- Five years ago, the Santa Cruz City Council struggled with ending the sleeping ban that criminalizes sleep for homeless people, but they fell short of that goal. Instead of ending the sleeping ban, they settled for lower fines and fewer hours of community service required for hapless sleepers caught catching forty winks within the city limits.

Since then, City officials have acted to prevent the unhoused from residing in vehicles or even parking them, whether they were sleeping in them or not, in vast swaths of the city. Arrests under the sleeping ban are markedly up from just a few years ago, and there is nary a councilmember who is moved to do anything about it.

Yet a small group of determined activists are pushing forward in their efforts to end the ban, driven not by a groundswell of support, nor by political expediency, but just by a gut feeling that as long as homeless people can't sleep at night, no one else can truly rest.

When Human Rights Organization (HRO) member Bernard Klitzner approached Tim Ahern of the Service Employees International Union (SEIU), he found they were in sync on this issue.
Ahern is part of a struggle by In-Home Health Care workers with a union that is satisfied with negotiating less than a living wage which leaves the threat of homelessness looming for SEIU homecare workers. Once homeless, even if still employed, SEIU workers fall victim to the sleeping ban. Ahern's union voted to abolish the sleeping ban sections of the Santa Cruz camping ordinance which prohibits all sleep on any public property from 11 p.m. to 8:30 a.m. -- even in a licensed vehicle.

HRO organizer Bob Patton said, "Our intent is to alert the community as to how devastating these laws are to the homeless person and how against the Bill of Rights they are. As far as we are concerned, these laws are against human rights,"

In that spirit, Ahern vowed to take the issue before the SEIU membership and asked Klitzner to organize some speakers. At their first meeting, a healthy debate emerged and some wanted to immediately endorse ending the sleeping ban on the spot in executive session. But since Jeff Smedburg and other union leaders were still smarting from having endorsed the ill-fated Santa Cruz Coast Hotel Project in a similar executive session, and without consulting the full membership, they balked at proceeding without a formal forum being held.

On July 13, 30 SEIU members and some members of the public attended a forum held at the Union Hall in Santa Cruz. HRO organizer Bob Patton was worried when he arrived and found that SEIU leaders had scheduled the presenters from the HRO in a debate style and facing opponents. Worse, the signs in front of each group referred to repealing the camping ordinance and not the sleeping ban. A park ranger and a Parks and Recreation worker volunteered to take the position of the City of Santa Cruz in opposition to ending the sleeping ban.

"We had five specific points we wanted to present and have them endorse," said Patton. "By the time it came to July 13th, things had gotten bastardized and turned around. Our five points were gone and it was a debate about repealing the camping ordinance. We had to explain ourselves over and over again that that was not our issue."

The five points advocated by the Human Rights Organization were first articulated in a letter to the Santa Cruz City Council by local civil rights attorney Kate Wells in December 2004. They are:
1. Suspend winter citations for sleeping, use of blankets and camping.
2. Dismiss all present and past citations.
3. Set up a minimum of 40 car parking spaces which allow sleeping at night.
4. Set up emergency campgrounds in parklands for homeless people.
5. Mandate additional training and direction to the police department.

"The union has members within it who are homeless from time to time," Patton said. "Our initial response when we went to the executive meeting in May was that they were quite enthusiastic to our proposal."

But it was a different audience at the July 13th debate. Several Parks and Recreation officers and maintenance workers arrived with photos of garbage piles and buckets of hypodermic needles. Parks and Recreation worker Andrew told the audience that "only one in a thousand can be helped." He added, "They leave needles in the children's playground; they defecate in the children's playground. We hauled five tons of garbage out of Moore creek. I just talked to a councilmember before this meeting. He told me that there is adequate shelter for those who want to use it."

Santa Cruz Mayor Mike Rotkin -- a supporter of the sleeping ban -- acknowledges that homeless shelter is inadequate, and glaringly so, 8 months of the year.

"Please do not pass this, not for the sake of the union members, but the sake of our community," Andrew urged the SEIU membership. He then denounced the homeless residents of Santa Cruz in the most pejorative terms, stating, "They are not city residents, they are not county residents, they are not even from our state. They come here for cheap drugs and generous social services. It's not all of them. That would be unfair. There are families out there that need our help."

Many SEIU members also expressed apprehension about an "influx of homeless" and the loss of a valuable "police tool" for questioning vagrants were the sleeping ban to be lifted.

Opponents of the ban replied that the entire homeless community could not be denied their need to sleep at night because of the bad behavior of a few. "They were a bit too enthusiastic about their invasive enforcement tools," Patton said later. "The Needs Assessment Survey of 2000 showed that 71 percent of our homeless population last had housing in Santa Cruz County. There are laws and regulations that deal with specific acts such as littering, trespassing, etc. that can be used. I was frightened at the animosity and the outright disdain for the homeless expressed by the rangers."

At the meeting, SEIU member Anna Brooks declared that she "knew all about the camping enforcement." She claimed that ticketing is rare, only done on complaint, after a warning has been given, and only as a last resort. Brooks unsuccessfully sued Klitzner, Norse, and the author of this article in 2000 for harassment, but the suit itself effectively derailed a lobbying campaign against the sleeping ban by the mayor's office at the time. As one of the presenters, I commented that the complaint-driven ticketing only occurs in residential areas, whereas citations issued out in the parklands (the majority of tickets issued in Santa Cruz) are issued in the absence of any complaint.

Parks and Recreation maintenance worker John Gilbert tried to see both sides of the issue while addressing the impact of illegal camping on Parks and Rec facilities. "I understand that people need to have a place to live," he said. "I understand that not all the campers trash the place. One of the problems of having camping -- a constant presence -- is that stuff isn't necessarily used in the manner in which it was designed. You go and clean up the bathrooms in the morning, where scores of people have come out of the woods to bathe and use the facilities, and there is a big mess one hour after it opens."

HRO presenter Ray Glock-Grueneich warned the audience that the current ordinance was a "false solution to the current problem. The kids who want to be in your face are from the suburbs and are not the ones they run out of the bushes."

Since the current law makes sleeping illegal from 11 p.m. to 8:30 a.m., it attempts to reverse the sleep cycle in homeless people. One wonders at a city mandate which, if followed, leaves people disoriented and less functional. "One of the techniques that the military have used in Guantanamo was to reverse the sleeping hours," Glock-Grueneich said. "There is a debate about whether this is torture or not. You find that when the sleeping hours are involuntarily reversed, you cannot function to the same degree."

He suggested that we only have two choices in a city that is not ready to address the sleeping ban: "Get enlightened leadership from places like the unions. Or you use coercion. Get lawyers and file a civil rights lawsuit." He asserted that the sleeping ban is unconstitutional when applied to poor people who have no place else to sleep because shelters are full. "That's why we have Eichorn which provides for the defense of necessity. But there's a catch. The defense of necessity requires the burden of proof to be on the defendant to prove their case. A defendant has to hire an attorney. So a defendant has to come up with thousands of dollars for an attorney when they didn't have the $50 for a motel room."

The SEIU conferred in closed session. John Gilbert reported the results. "We decided to not vote on it. The issue was not tabled. It was removed from consideration." He said that many anticipated a bitter fight if the SEIU went forward. Many asked why this issue should be voted on right now. Gilbert left one note of hope. "The door is not closed to a more concrete proposal," he said.

Bob Patton described his own bottom line. "I keep coming back to -- and I can hardly believe I am saying it -- there is a law against sleeping in Santa Cruz. There is a law that makes sleeping illegal. There is a law that makes covering up against the elements at night illegal.
"This smacks of the old South, racism and a community in denial about the human rights violations going on to a certain class of people. And the destruction that these laws cause, not just to these individuals, but to our civil society itself. We are a community with responsibilities. Like it or not, we are responsible for the damage we are doing to this class of people. These laws are not the answer."

The Human Rights Organization meets weekly at 115 Coral St. in Santa Cruz inside the Homeless Services Center dining room from 1:45 p.m. to 2:45 p.m. All are welcome.

Posted by Becky Johnson at 6:27 PM