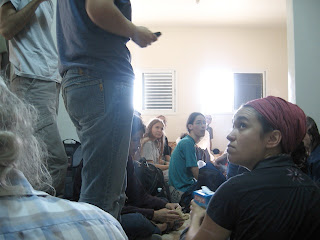 UPDATE MARCH 23 2009: This was the article which caused the rift between George Cadman at Free Radio Santa Cruz and myself. I had written a different article criticizing both Adam Shapiro of the ISM and Alison Weir of "If Americans Knew..." on Cadman's radio show. I sent my article around to different sites and Honest Reporting picked it up. They rewrote it, added in new information including the phone number and e-mail for the radio station and credited me as the source. The entry caused a flood of e-mails and phone calls to FRSC, one of which was thought to be threatening. I defended my writing by saying that I have a right to write a review of another programmers show. Some accused me of trying to get the FCC to shut down the station which was definitely not true. --Becky

HERE IS THE HONEST REPORTING ENTRY:

When it comes to Palestinians, some people in Santa Cruz, California, can't bend over far enough to defend them. On January 5, Free Radio Santa Cruz 96.3FM broadcast an interview with Alison Weir and Adam Shapiro. Weir is the founder of If Americans Knew, an anti-Israel group, and Shapiro is an American Jew who gained notoriety last spring by sneaking into Arafat's Ramallah compound for breakfast -- just a few weeks before Shapiro married his Palestinian girlfriend.

Astonishingly, the Santa Cruz broadcast happened 7 hours after the horrific double-suicide bombing in Tel Aviv. Neither of the guests mentioned the massacre, though they spent much of their time bashing Israel. "When people say Israel has a right to exist, it means Israel has a right to discriminate," Weir declared.

The show's host, George Cadman, asked, "Well, isn't Israel justified in having all these military arms? Aren't they surrounded by Arab nations who are hostile to them?"

Weir's answer: "They would not need such a strong military if they gave human rights to everyone." She then explained that Arab countries have no desire to attack Israel, and that with one exception, Israel attacked first in the wars of 1948, 1956, 1967 and 1973.

Weir says that in Israel "There is an enormous apartheid system." Yet she doesn't explain that Israel has an 18 percent Arab population who enjoy religious freedoms and full citizenship rights -- as well as 12 members of Knesset.

Thanks to Becky Johnson for the alert.