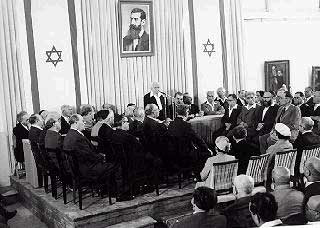 Photo of Israel's Declaration of Independence May 14, 1948

Based on a conversation with "Marc" that occurred on March 9, 2009 on the TOPIX forum hosted by the Santa Cruz Sentinel:

Complete discussion can be found at the following address: http://www.topix.net/forum/source/santa-cruz-sentinel/TOHL7C396IPTLQ6LU/p42

Many are familiar with the Palestinian refugee problem and the contentious issue of the so-called "Palestinian right of return." Some say that Israelis are "more indigenous" or more directly related to ancient Jews than Palestinians. But aren't Arab Muslims, some of them at least, traceable to Biblical stories of Isaac and Ishmael? Don't reasonable people accept and recognize that both Israelis and Palestinians have legitimate claims to the land and it will have to be shared?


A small portion of Israel's Jews today can trace their lineage in the area back 3,300 years. These are called the Mizrayim. Yes, both Arab Muslims living in on the West Bank and in Gaza have legitimate claims to the land on which they reside, but the Jewish claim to the land is superior for the following reasons:

1. Jewish history predates Arab/Muslim history
2. Only the Jews built a nation throughout the whole span of history
3. Jewish artifacts document that long history
4. Jewish texts document that long history
5. The Jewish expulsion from Israel (in 135 C.E.)was not legal
6. Arab/Muslim "ownership" was by bloody conquest, was brief, built nothing
7. Neither the Greeks, nor the Turks, nor the Brits built a nation in Israel
8. Zionist immigration built the modern state
9. The British Balfour Declaration declared Jewish settlement in Palestine to be the law 1917
9. The UN GA ratified Jews returning to Israel
10. Israel has taken its place with the membership of nations
11. Israel is the location of the Jews most holy site
12. Jewish religious text say that God gave the land of Israel to the Jewish people
13. There are 22 other Arab/Muslim countries. There is only ONE Jewish nation. there is no need to form ANOTHER Arab/Muslim nation so that Arab/Muslims can have citizenship, much less out of the TINY Jewish one.


The answer is political and not military. When the Palestinians accept Israel's right to exist as a Jewish State, agree to borders, agree to honor Israel's sovereignty, agree to not take up arms against Israel, there will be peace. Israel cannot make peace. Only the Palestinians can do that. In the meantime, Israel is a thriving nation and isn't going anywhere no matter what the Palestinians decide.

The "Right to Return" is neither a right nor are the Palestinians who now live in Jordan, Lebanon, and Syria even from Israel. Most were born where they are. Those who qualified to go back, did. Israel has already "returned" 170,000 through normal immigration processes. Many bypassed the Israeli authorities and returned themselves through illegal immigration resulting in a tripling of the Palestinian population of the W.Bank since 1967. The "Right to Return" is just another bogus argument in a long string of bogus arguments to try to delegitimize Israel. The whole concept should be trash-canned.
Posted by Becky Johnson at 12:28 PM