CASUALTIES FROM THE GAZA OFFENSIVE 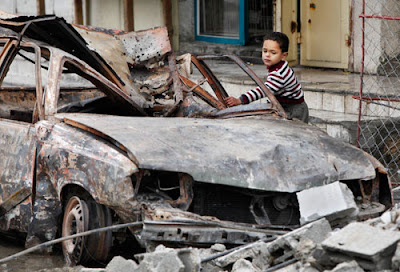 Palestinian Center for Human Rights reports 1,417 Palestinians dead, including 926 civilians, 255 police officers, and 236 fighters.. 13 Israelis were killed (IDF claims many were from "friendly fire")Over the course of the 22 day Israeli assault on the Gaza Strip, a total of 1,417 Palestinians were killed. Of these, 236 were combatants. The vast majority of the dead, however, were civilians and non-combatants: protected persons according to the principles of IHL. PCHR investigations confirm that, in total, 926 civilians lost their lives, including 313 children and 116 women. 255 police officers were also killed; the majority (240) in air strikes carried out on the first day of the attacks. The Ministry of Health have also confirmed that a total of 5,303 Palestinians were injured in the assault, including 1,606 children and 828 women.

Israel Defense Forces spokesman's office claimed their figures contained the names of 1,166 Palestinians killed in the conflict, called "Operation Cast Lead."
The Israeli military said 709 of them were "identified as Hamas terror operatives, among them several from various other terror organizations."

The remaining, the statement claims, were comprised of 162 names who "have not yet been attributed to any organization."

"Furthermore, it has come to our understanding that 295 uninvolved Palestinians were killed during the operation, 89 of them under the age of 16, and 49 of them were women."