City Takes Broadcaster to Court for Chatting at the Metro 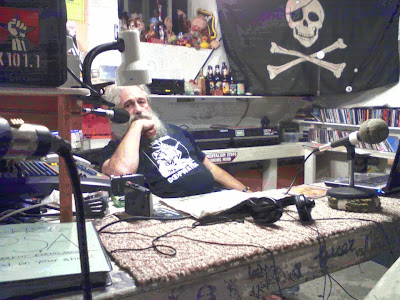 Over 6 months ago on Sunday 11-2-08, I was approached by a Metro Security guard at the Metro Transit Center in downtown Santa Cruz. I was interviewing two homeless men for Free Radio Santa Cruz. The guard insisted I leave. I declined to do so. He called the police. He insisted I be given a citation for "Refusal to Leave a Business When Asked"--a charge with an apparent fine of $200+ Police did so and demanded under threat of custodial arrest that I leave the property. I was forced to do so. A week or two later I returned with a group of protesters and we reasserted the right to be in that public space.

Two homeless men, Les and Jack, approached me after my Sunday radio show as I walked along Pacific Avenue and complained that religious sermons were coming out of the speakers at the Pacific Ave. entrance to the Metro Transit Center. They said they'd complained and were told to leave with the sermonizing continuing.

I then went to the Metro, found they were correct, and began recording what the Metro speakers were broadcasting. I then approached a security guard who refused to identify himself or his superior and declined to help me. In subsequent public records act requests, the guard involved still remained anonymous.

I then approached a Metro Supervisor who arrived on the property--Mr. Ed Nelson--who had the religious sermonizing turned off, explaining that classical music was customarily used to "discourage" assemblies of young people on the adjacent public sidewalk and in front of the Metro Center. All this is documented on audio tape available on line on this website (see below).

An hour later I returned and began interviewing Jack and Les near the sidewalk at the broad entrance way to the Metro Center next to Pacific Avenue. When a security guard directed two Latino men to "move on", I advised them that they had the right to be there. A second security guard, whom I later learned was named D. Delgadillo, then approached me and demanded I move. When I insisted he identify himself, he demanded I leave the property.


BUSTED FOR CHATTING AT THE METRO

The SCPD instead of defending my right to be there and advising the Metro Security guards to stop bothering me, forced me to leave the property on threat of arrest.

A Metro supervisor subsequently humiliated me further and banned for the day because I was visibly tape recording the complaint I made to her and her response.

The charge is refusing to leave a "business" when asked to do so.

Attorney David Beauvais of Berkeley will be defending me in the case. Attorney Kate Wells will be filing the subsequent federal law suit for damages. The trial will be before Judge Ariadne Symons without a jury. City attorney Barisone or one of his attorneys will presumably be appearing for the city.

I returned to the Metro Transit Center a week or two after the police incident with a group of people, distributed fliers, and tried unsuccessfully to get Metro management to clarify what the rules were for the public and what the powers of their security guards were (i.e. could they simply ban people whose attitude they didn't like). I got no answer. However on this occasion, with video cameras rolling and lots of witnesses, the same guard did not harass or attempt to arrest us.

Vice-Mayor Mike Rotkin (who has been on the Transit Board for some years) initially advised me there was no "flyering" allowed. I wasn't flyering when I was cited on November 2nd (simply standing and talking to two homeless guys). When I heard Rotkin's outrageous rule, I and others organized a peaceful protest that specific included distributing a flyer that described what happened on November 2nd.

We spoke to members of the public and distributed literature for about an hour. Rotkin subsequently called me and advised me that he was mistaken--that it was okay to flyer the public at the Metro Transit Center.

As long as it didn't "disrupt business."

Somewhat later in a subsequent interview, when I brought it up again, Rotkin apologized for the misunderstanding, but took no action to look into the bogus ticket.

He was also not helpful in securing documents for my trial, clarifying the rights of passengers, or advising the Metro and City Attorney to drop the case. He could have spared the city, county, and Metro Transit District money in these lean times by acting promptly and fairly to quash this groundless prosecution.

Instead we're going to trial Friday.


POLICE MISUSING THE LAW TO DRIVE AWAY THE POOR

The trial will also highlight the collusion between security guards and the Santa Cruz Police Department in accepting an unlawful arrest.

Members of the public at the Metro are supposedly protected by a law that requires they be given written notice, a specified period of time, and an opportunity to have a hearing--as well as the right to use the facilities unless actual disruption is occurring (MC 9.60.0101 - TRESPASS ON PUBLIC TRANSIT FACILITIES)

Police and Metro Security Guards have colluded instead in using an inapplicable broader law that allows private businesses to order people off their property. Obviously, the Metro is not a private business, but a public facility. Even if it were, MC 9.60.010 REMAINING ON BUSINESS PROPERTY AFTER A REQUEST TO LEAVE. provides exceptions for "prohibited discrimination", "duties relating to common carriers", and "inhibition of...freedom of speech or assembly."--all of which were involved.

It took six months worth of Public Records Act requests and discovery demands to get the SCPD to cough up some statistics: Not just me but five other people have been apparently wrongly charged under this broader law instead of the more appropriate MC.9.60.0101). It's a nice way of sweeping people away from an area without any due process.

Of course, that's what happens to homeless people all around Santa Cruz.


AUDIO OF THE ENTIRE INCIDENT AVAILABLE

Those who want to hear what happened on November 2nd can go directly to the audio file included in the first story. I recorded virtually everything that I and the various guards, supervisors, and police said--as well as the original complaint I received that the Metro was broadcasting religious sermons over its loudspeakers.

It may have been management resentment at my raising this issue with the security guards that motivated the subsequent harassment.

I was also critical of the guards for harassing poor and possibly homeless people hanging out there who were doing nothing wrong. And refusing to identify themselves or their superiors when asked to do so.

The public is welcome to attend the trial. I shall move to have it audio recorded for public broadcast, but judges have become increasingly secretive in the past few years, so I may be banned from making a recording.

If you can't make it on Friday, I'll be discussing the case on my Sunday show at 11 AM on Free Radio Santa Cruz at 101.1 FM (http://www.freakradio.org).
Posted by Becky Johnson at 7:54 PM