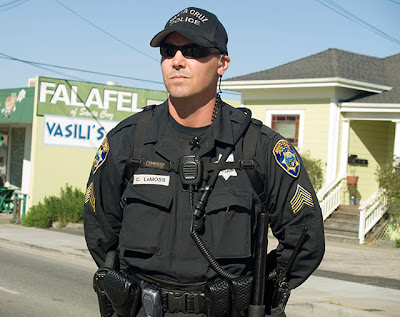 Santa Cruz, Ca. -- When Donna Deiss went to put sugar in her cup of coffee the last thing she thought was that she would be assaulted by a police officer, but that is what occurred. SCPD Lt. Christian LeMoss grabbed Donna from behind as she stepped into her RV, grabbed her arm, hurled her backwards and into a parked car, and then dropped her onto the ground hard enough to break her arm. She was initially charged with assault and battery on a police officer, and resisting arrest. Then a charge of drug paraphernalia was added three days later. Then that was dropped. By June 28th, the assault and battery on a police officer charge had also been dropped. Today, in a plea bargain, she plead no lo contendere to an infraction littering charge and the resisting arrest charge was dropped. She has been ordered to perform community service at a non-profit organization.

"I'm so relieved," Donna stated outside the courtroom as she met with her two attorneys, Ben Rice,Greg Coben and another supporter. "This whole case has been a nightmare." Rice defended Donna in her criminal trial. Coben is her attorney for her civil suit against the City.

A full panel of potential jurors waited in the trailer while Santa Cruz City Attorney, Delgadillo pitched the charge reduction. This could easily have been done at Friday's hearing on May 15th, but in a practice that has now become quite familiar, in cases where the City is likely to lose, they wait until the last possible minute to either drop charges or, as in this case, cut a deal.

"Ben spent all weekend preparing for trial," said one woman supporter. No doubt, most of those jurors would have preferred to go to their jobs, schools, or be at home with their families.

So what did Sgt. Christian LeMoss do at the Three Trees parking lot on W. Cliff Dr. last May?

Shortly after the incident,Zach Friend, the Santa Cruz Police Department spokesperson told reporters that “Deiss was with a group using drugs,” “Sergeant LeMoss asked her to stop moving, he identified himself as a police officer several times, and when he grabbed her arm to detain her she threw hot coffee into his face.”

The Santa Cruz Police Department press release, issued three days after the incident claimed "When the officer attempted to detain Ms. Deiss she threw a cup of hot liquid onto his face. Despite being burned, the officer was able to control and eventually take Ms. Deiss into custody ."

Deiss claims the officer never properly detained her, was not in uniform, did not identify himself as a police officer, and was driving an unmarked car. He had no reason to detain her, much less violently spin her onto a parked car, cuff her, then throw her on the ground so hard that he broke her arm. The cup of coffee she had been holding in her left hand spilled everywhere including on Ms. Deiss.

"It was lukewarm," she told HUFF. "I was not burned. I am surprised that the officer claims he was burned." Donna's shirt was stained with the spilled coffee.

No marijuana was found on Ms. Deiss at the time of her arrest. Another woman, known as White Dove was also arrested. She didn't have any marijuana either but two empty pipes were found in a garbage can near her.

The SCPD repeatedly identifies the lot by its street address. This raises the question of whether they even had jurisdiction to patrol that particular parking lot since it belongs to the State. A nearby City parking lot is repeatedly mentioned leading to some confusion as to where the incident occurred. The parking lot, locally known as "Three Trees" has been a gathering place for homeless and poor people, and at least one drum circle.

Today, one year and nine days after Deiss was brutally assaulted, injured, charged, and threatened, she has been convicted of littering. The evidence? A defense exhibit photo showing the coffee cup on the sidewalk where it lay after Sgt. LeMoss had broken Donna's arm and arrested her.

Attorneys continue to prepare for Donna's federal lawsuit against the City of Santa Cruz.
Posted by Becky Johnson at 11:39 AM