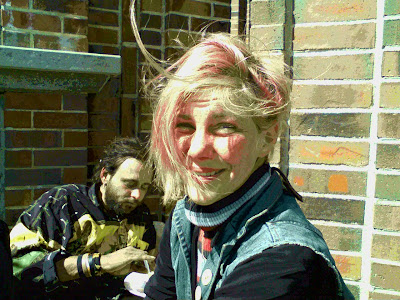 
THIS LETTER WAS SENT TO SANTA CRUZ MAYOR, CYNTHIA MATHEWS ON WEDNESDAY, MAY 20, 2009. MIGUEL DE LEON AND ANNA RICHARDSON FACE A CIVIL INJUNCTION IN COURT #4, FRIDAY, MAY 29, 2009 FROM 10:00AM - NOON. (this is one week later than originally posted) AT 701 OCEAN ST. IN SANTA CRUZ, CA. THEY ARE BEING REPRESENTED BY PRO BONO DEFENSE ATTORNEYS JONATHAN GETTLEMAN AND MARK BRISCOE.

May 20, 2009
to: The Santa Cruz City Council and Mayor Cynthia Mathews

re: new use of civil injunctions

City Attorney John Barisone has launched a civil suit against a homeless couple, Anna Richardson and Miguel de Leon for 60 citations, 90% of them for illegal sleeping. Normally, under Santa Cruz municipal code, violators are issued infraction citations. These can be prosecuted in a criminal court. Since 2006, infraction citations which have not been adjudicated have been assigned a civil judgment rather than a criminal judgment, for which fines can be assessed, their wages can be garnished, bank accounts attached, and, for vehicular code violations, their vehicle license and registration prevented, and driver's license renewals delayed or their license revoked, and the information on non-payment reported to the credit bureaus.

Recent statements made by Mr. John Barisone and Councilmember Ryan Coonerty indicate that this civil judgment is insufficient for people who are already homeless, have ruined credit ratings already, and are forced due to their economic circumstances to illegally sleep at night out of doors. Both indicated that more punishment was needed.


I need not remind the council that the courts and jails are jammed up with thousands of infraction citations issued to homeless people for quality of life crimes such as sleeping, sitting, begging, trespassing, possession of an open container, conduct on public property, and jaywalking. Citations which they can neither pay nor even, in some cases, cease violating the law. Is sleeping at night even a voluntary act? It is ironic, at the same point in time in which this new civil violation method, along with the homeless court are finally reducing the over-population at the Santa Cruz County Jail, that Councilmember Ryan Coonerty and the council itself have retreated to making 3 infractions a misdemeanor again, with accompanying jail confinement, jury trials, and public defenders. This is both unwise policy and fiscally unwarranted.

As if that were not enough cause for concern, now we see the City taking a homeless couple to court for a civil injunction. It seems clear that this couple have run afoul of a few downtown merchants, who have the option of filing their own civil suit against the couple as their legal remedy according to law. So why is the City rushing in to do their bidding?


I have a neighbor who runs his leafblower from time to time and it bothers me. Will City Attorney Barisone now take up my civil issue with my neighbor and pay all my court costs? Why not? Don't you like me as much as the merchant whose legal bills you have decided to pay?

My point of course is that this case in particular, and other cases of this nature in recent memory ( the case of Jerry Henry in Aptos, and the Koffee Klatch Three case against Bernard Klitzner, Robert Norse, and myself) were all cases where an individual or business had a complaint against a person/persons. They had the legal option of seeking relief in the courts through the use of a civil complaint. However, when the City (or County with the Jerry Henry prosecuted by George Kovacevich) steps in and pays all legal expenses for any particular litigant. This is a slippery slope for which cronyism and selective prosecutions are the norm.

Homeless United for Friendship and Freedom (HUFF) has met and resolved to oppose this new tactic in the war on homeless people the City seems so eager to wage. We find it an abuse of process, prone to favoritism, and chosen in a calculated fashion as the homeless couple in this civil injunction are not afforded a lawyer as they would be in criminal court. The standard of proof is also weaker-- preponderance of the evidence rather than guilt beyond a reasonable doubt. You are looking to subject homeless people to criminal penalties without the benefit of a criminal trial.

Becky Johnson on behalf of HUFF


SANTA CRUZ -- At the city's urging, a judge on Friday ordered a homeless couple not to sleep outside in the downtown area, rendering their current lifestyle a contempt of court.

The city's unusual injunction request against Ana Richardson, 27, and Miguel DeLeon, 35, came after the street musicians failed to respond to more than 60 tickets for violating various city regulations. They have been cited for sleeping outside, washing in a public fountain, sitting on a sidewalk within 50 feet of an ATM, being in a park after hours and others.

The injunction carries greater penalties than a ticket, including up to five days in jail and a $1,000 fine.

The alleged offenses occurred before a new city ordinance passed earlier this year that increases penalties for failing to pay citations and makes ignoring them a misdemeanor offense that can result in arrest. Previously, unpaid citations went to a collections agency and could be ignored with little consequence.

City Attorney Susan Barisone had sought to include several offenses in an temporary injunction, but Judge Paul Burdick chose to limit it to the city's so-called camping ban, attorneys said. It limits people from sleeping outside, from carrying bedding and from setting up tents and other sleeping gear.

Despite the paring down, Barisone said she was pleased, as the bulk of the complaints from downtown businesses were related to the pair sleeping there.

"I think it will help the downtown community quite a bit," she said.

Several businesses complained, she said, and a handful put those complaints in court documents, including the post office, Bunny's Shoes, Borders Books, Lulu Carpenter's and the Palomar Building.

The couple's attorney, Jonathan Gettleman, said he was gratified that all the behaviors were not enjoined, but said the crux of the problem remains -- there is nowhere outside for them to legally sleep. If they sleep outside of the downtown area, it is still illegal, and they are subject to citation; they just won't be violating a court order.

"The reason they stay downtown is that it's somewhat safe and patrolled," he said. "And they do their best to be as minimally impacting as possible. I just couldn't get my mind around how the court could say just go sleep illegally somewhere else.

"I could see him wrestling with it, but in the end, he took the posture that technically they violated this ordinance multiple times and that was the standard."

Barisone said she limited her argument to the municipal laws the couple violated, and steered clear of any debate about what services the city should or shouldn't provide to homeless people. And, she said, the downtown area is where their actions were "having a particularly deleterious effect on the community."

"And the fact was, these two particular defendants expressed refusal to use available services," she said.

One reason for that, DeLeon said earlier, is that they play music at night and the shelter requires those who stay there to arrive in the early evening.

Richardson, who left her Santa Cruz home at age 14 and has held various minimum-wage jobs, and DeLeon, who grew up in Elk Grove, have lived on the streets for several years. They dream of making a living and making the world a better place with their music.

Several of their supporters came to the hearing Friday, Gettleman said, and the mood turned somber after the judge's decision. The couple told him it felt like more of the same "move along" they keep getting from police.

Gettleman, who took the case pro bono, said he will represent DeLeon and Richardson at trial if a compromise cannot be found. A trial would determine whether a permanent injunction should be issued.

"If the city is going to arrest people for merely sleeping in a populated area, there is something about it that would bother me if I didn't," he said. "It's really sad. This lacks the core compassion that this community has held itself out to represent.

"It's a real problem and there has to be some solution."

Gettleman said he hopes some solution can be found, perhaps a place where the city will allow people to sleep outside without ticketing them.

He added that the "standard of civility" the city is trying to regulate is "starting to get really creepy."

The case is set for a trial management conference in September.
Posted by Becky Johnson at 8:46 AM