The County wanted them to leave 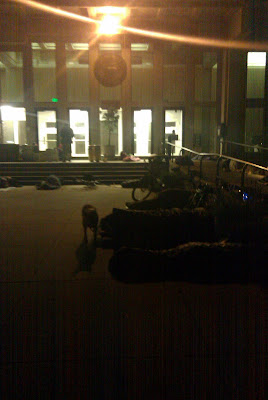 Santa Cruz, Ca. -- After three days in Judge John Gallagher's court, with two panels of 80 average citizens each having had their lives disrupted, missed classes, had to hire babysitters, missed work and worried how to replace that lost income, a jury panel has been installed: 12 jurors and 2 alternates.

The Peace Camp Six, now reduced to five, following the unexplained absence of charismatic, Peace Camp 2010 spokesman, Chris Doyon, now face a jury of their peers to decide whether they were criminally "lodging" on the steps of the Santa Cruz County Courthouse last July and August, and at the Santa Cruz City Hall last August, September, and October, as part of a protest against the use of Sleeping Bans at all in a situation in which inadequate shelter exists.

Assistant District Attorney Sara Dabkowski has subpoenaed 31 witnesses, to testify, all of them on the County or the City's payroll. Defense Attorney Ed Frey, has subpoenaed three, of which none are on the County or City payroll. I mean what does a boss EXPECT his employees to testify to? Like Donald Trump, asking his celebrity apprentice contestants if they will vote for him for President, and then laughing he'd fire them on the spot if they said "no" "for stupidity."

DA Sara Dabkowski began by telling the jury that the defendants "chose to be there, chose to sleep there, and not because they needed to. That the five defendants, on eight different nights, chose to spend the night somewhere they did not have permission to be."

"The County wanted the people who were staying there to leave," she explained. "They were given a written warning to leave. If they were packing up and getting ready to leave, they were not cited. The defendants chose not to leave. You will hear testimony that the sheriff's gave plenty of time to leave. " "Some people refused to sign the citation and they were arrested and jailed." "You will hear testimony from Santa Cruz Police who worked it into their normal shift schedule to go thru City Hall, warn people that they couldn't lodge there, and then going back later and citing those who failed to leave. Only the repeat offenders were cited. The people they arrested were the people who were lying down, sleeping, or pretending to sleep. I'm going to ask that you find each and every one of the defendants guilty of illegal lodging."

"First, I want to thank you for your service on this jury. This is a case of unlawful lodging. You just heard from District Attorney, Sara Dabkowski, that the defendants chose to spend the night somewhere they are not allowed to be. PC 647 (e) says if a person does not own property, and this includes every inch of land inside the borders of the State of California, that if you don't own your own home, don't rent an apartment, or stay in a motel, then you cannot sleep."

"If you don't own it, you may not lodge on it. Defendants were sleeping together in a group. Sleeping by yourself is less safe than sleeping in a group. One of our defenses, under the defense of necessity, is that we wanted to preserve our safety and our health. Sleep is an actual, physiological need for human life. There is also another necessity. A necessity of conscience. There can be a point where, after so much injustice, it is incumbent to break the law, to demonstrate the conviction that a person has a right to sleep.

We have over half a million people homeless in this country. Is that homelessness voluntary?Now I have a home. But the other defendants didn't have a home. And, during this trial, you will come to understand that they are homeless by necessity and circumstances, and not homeless by choice--in fact, no choice was involved. They were subject to circumstances beyond their control.

If when you carefully examine the elements of a necessity defense, you will find the evil they were avoiding is the detriment to their health they would suffer if they couldn't go to sleep. Decide for yourselves if the defendants really had a choice.

Lt. Fred Plageman was clearly the go-to guy last summer when he was told by County Counsel to issue PC 647 (e) citations (or make arrests) of those who would not leave when told to. A veteran with 23 years experience, Plageman, who supervises 29 employees, was the supervisor in charge of security at the County Building on the night of August 6th.

On or about August 1st, Plageman testified he attended a meeting of Susan Mauriello's assistant and Sheriff Wowock. "They told us to enforce the unlawful lodging law. The people we contacted were lying prone, supine, or on their side, were in bedding, or were sleeping, staying, lodging over night. Someone who was sitting upright or not on bedding, we did not issue a citation. Anyone who refused to cooperate, we issued a citation.

Prior to August first, Plageman testified that "Unlawful lodging was taking place. People were camping overnight, the smell of urine. They were holding social activities 'round the clock. I saw the general decline in the area. I saw the grass turn brown and go to dirt. I saw sticky food substances. The facility use had become extreme and the number of people grew to as many as 30 or 40, although the numbers were greater at night. Sometimes it dropped to 12 or less."

Plageman testified that on the night of August 6th, he personally supervised a team of 6 or 7 sheriff's who first issued warnings in writing to those who were "illegally lodging." After an hour or more, they returned and arrested anyone who did not leave.

When asked if a lot of people left, he said "Yes, about half of them." He testified that they continued to cite people from that point on, perhaps writing the last citation around 2AM.

"Who wrote the notice?" asked DA Dabkowski. "The County Counsel wrote it." He testified that as the team circulated with the warning notices and later to write citations that "there were a lot of people around us who were walking along with us, who demanded to know what our authority was, and what our business was. It started out civil but it progressed to the point where we felt physically threatened, people yelling threats. I was concerned we were going to have a riot."

The notice said that "Lodging at any time will not be tolerated.

On cross-examination, Plageman defined a lodger as "camping, sleeping, or spending the night." He defined camping as "going someplace, going to sleep, bedding, tents." Frey asked " To lodge, don't you need a lodge?" but Dabkowski objected to the question and Gallagher sustained her objection.

"Lodging" is not defined in 647 (e) so it's up to anyone's interpretation of what forms the elements of illegal lodging. So Frey asked "How would defendants know what lodging is?"

"Well, there are signs on the highway that say "Gas, Food, and Lodging" Plageman responded.
"Were there any signs out in front of the courthouse preventing anyone from being there?"
"I don't know."
"Are there any signs there now?"
"I think there might be."

Plageman explained that while Susan Mauriello is in charge of "all county property" her aide, Nancy Carrgordon is in charge of General Services at the County Building. Plageman was called to a meeting with Carrgordon and Sheriff Phillip Wowack. "They decided the activity that was going on was not going to be allowed to continue." He said that the area had degraded to "drugs, fights, public intoxication."

Frey asked Plageman, "What makes lodging illegal?"
Plageman thoughtfully constructed his answer.
"We didn't want to interfere with free speech, but the area had transformed into a campground and posed health risks and hazards. As far as that area goes, lodging was unlawful--the camping, sleeping, and overuse of the area."

"Did you notice the presence of a porto-pottie?" Frey asked.
"Yes. A porto-pottie would arrive when the building was closed and disappeared the next morning."
"Was fecal matter ever found around the courthouse?"
"I heard reports."
"Any personal knowledge of fecal matter found around the courthouse?"
"No personal knowledge."
"Did the people cited ask you where they could go and sleep legally?
"Yes."
"What did you tell them?"
"I said I didn't know."
"So today, if someone were illegally lodging, do you know today where they could go and legally sleep?"
"I don't know."
"Who owns the courthouse?"
"The taxpayers own it."
"In order to legally lodge, you need the permission of the owner. Does the County own it or do the citizens own it?"
"The citizens."
"Were people "lodging" prior to August 6th?"
"Yes."
"Then you as sheriff were aware of a danger presented by the five of us prior to August 6th?"
"No."
"Are you aware of any damage to the courthouse, the county building, or the Government Center from Peace Camp 2010?"
"No."
"How about victims. Were there any victims among the staff or the public during that period?"
"No."
"How about the people of the City of Santa Cruz. Were any of them victims?"
"Objection. Argumentative."
"Objection sustained."

"Was there any shelter space available that night?"
"I don't know."
"Did you or anyone at the County try to find out if any shelter was available?"
"I don't know."
"If not, why not?"
"I don't know."
"Who was in control on August 6th between 6PM and 7PM? If a person wanted to ask for permission, who would they ask?"
"I don't know."
"Did the defendants interfere with anyone's rights or movement?"
"I'm not sure. I don't know. I was approached by workers who were upset and did not feel safe."
"Did any actions by the five defendants here make anyone unsafe?"
"No. There was a fight and a weapon was involved. There was lots of inappropriate yelling an antics that went on, but not sufficient that law enforcement action needed to be taken."
Plageman admitted that the sheriff's went out of their way to avoid making an arrest, despite that unlawful lodging calls for immediate arrest. "Custody is a big drain on our resources, and not necessary for this kind of offense."