In Santa Cruz, we organized Peace Camp 2010, a demonstration at both City Hall and on the steps of the Santa Cruz County Superior Court in order to protest against laws which prohibit the act of sleeping or use of a blanket. We consider these as crimes against humanity and a matter of conscience to oppose. First we were ignored. Then we were ridiculed. Then they really cracked down. Can a win be far away? 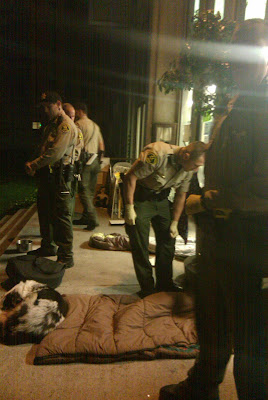 Sheriff's Deputies attempt to awaken a sleeping man to tell him he can't
protest there anymore or face immediate arrest for unlawful "lodging."
Aug 6 2010 Photo by Becky Johnson 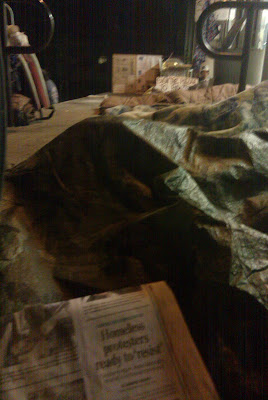 An unknown protester lies under a camouflage tarp with a copy of the Santa Cruz Sentinel prominently displayed with the title of the article "Homeless Protesters ready to 'resist.'" Photo August 6, 2011 by Becky Johnson 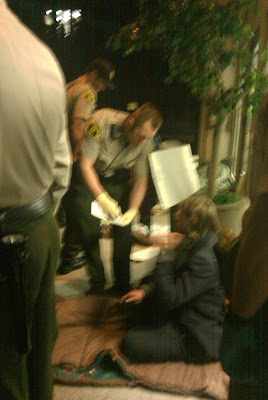 Sheriff's Deputies awake and cite a homeless man for PC 647 (e), unlawful "lodging", in an effort to shut down the protest which County officials had "tolerated" too long. Deputies could not tell any of the protesters where they could go and legally sleep. Nine months later, DA Sarah Dabkowski introduced evidence of 1 or 2 possible shelter beds the sixty some homeless protesters could theoretically have slept in that night as evidence of their "choice." 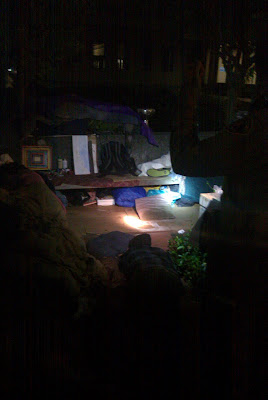 (on left)
Sheriff's Deputies pour over the art supplies of artist, Dreamcatcher, as
well as bedrolls,
clothing, and food supplies. In court, they referred to these things as "garbage" which was offending the "aesthetics" of the courthouse grounds. 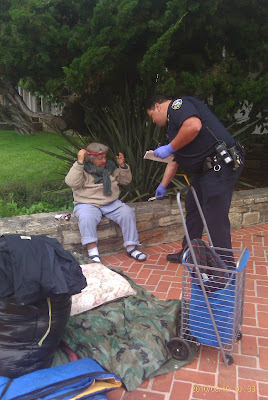 (on right) 72-yr-old Collette Connolly is cited by SCPD for unlawful sleeping. She was convicted of misdemeanor lodging May 4, 2011 and now faces up to 6 months in jail and/or $1000 fine. Connolly is both mentally and physically disabled and homeless.


Gary Johnson gets cited for use of a blanket when he is cited for sitting up, awake, in a charge, but covered with a sleeping bag. Video by Chris Doyon. 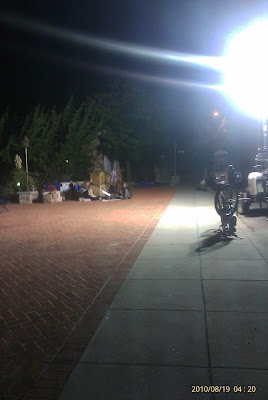 Klieg lights, costing about $100 a night to operate, shine down on Peace Camp 2010 at City Hall in a scene reminiscent of Guantanamo Bay. This along with the posting of "No Trespassing" signs at both City Hall and at the Public Library across the street by Parks and Rec Chief, Dannette Shoemaker were justified as "an oversight." Protesters claim the City Council wanted to shut down their legal protest. Photo by Becky Johnson August 19, 2010.


After nearly 165 years of open access by the public to the public grounds of City Hall, "No Trespassing" signs were installed after the arrival of the demonstration against the Sleeping Ban. Unless the public objects, less and less of public space is available for use by the public. Photo by Becky Johnson Aug 21, 2010 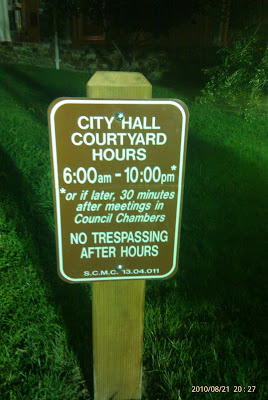 Posted by Becky Johnson at 4:10 PM