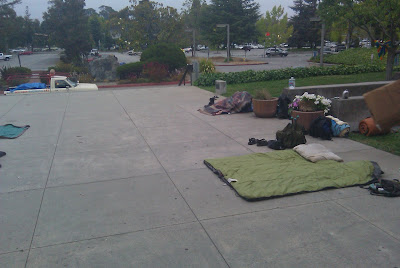 July 29, 2011 as another night of Peace Camp 2010 began. That night, 45 people were welcomed to sleep together in peace and safety, with a porto-pottie and wash sink available for hygienic reasons. A week later, they were arrested in the same place for lying down, covering up with blankets, or for sleeping determined to be "illegal lodging" by the Santa Cruz County Sheriff's Department. Photo by Becky Johnson
by Becky Johnson
April 30, 2011 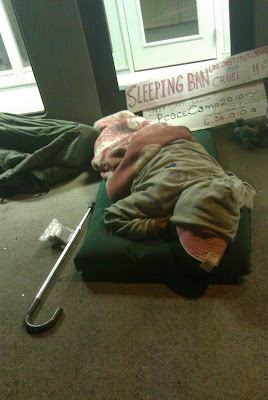 Santa Cruz, Ca. -- Collette Connolly sleeps on the courthouse steps in an open protest of Santa Cruz' cruel and unusual punishment for homeless people: a ban on the act of sleeping itself. Behind her were two signs she had herself chosen to speak for her cause:

Collette had been cited by the Santa Cruz County Sheriff's on August 6th under an even more punitive and open-ended law against illegal "lodging" PC 647 (e).
Connolly, age 75, is both physically and mentally disabled, was sheltered for a time (less than 30 days) at the Paul Lee Loft, but lost her place when she failed to return in time for the evening curfew. 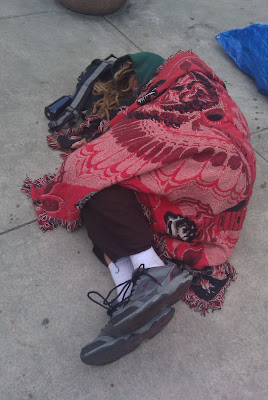 A homeless man, certain there was no shelter for an able-bodied, single male at any local shelter, sleeps in front of the Santa Cruz County Courthouse as part of a protest to raise public awareness about laws which criminalize the act of sleeping on both public and private property. Photo by Becky Johnson July 30, 2010 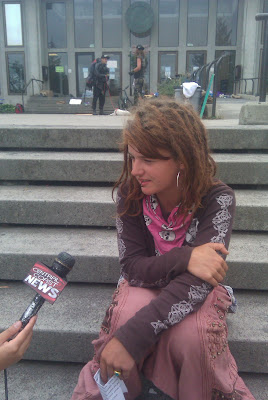 Christine Nibheolain, an Irish national, is interviewed by Azenith Smith of KION after she was cited for misdemeanor "lodging" as she slept in front of the Santa Cruz County Courthouse to protest the Sleeping Ban.

Nibheolain spent eight hours in jail. The Ireland native joined the homeless camp four days ago, since she says, the shelters are full.

"I'd rather be here illegal and under the lights and know that I'm safe," says Nibheolain.

Posted by Becky Johnson at 3:07 PM