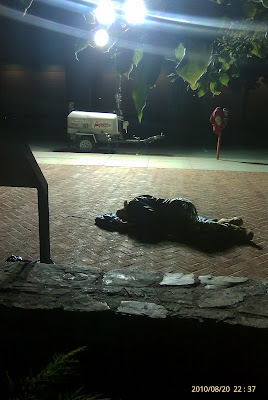 A lone protester sleeps in the forbidden zone at Santa Cruz City Hall last August as City-sponsored klieg lights glare down at him. Photo by Becky Johnson Aug 20 2011

Santa Cruz, Ca. They swarmed the hallways, cluttered the benches, many clutching books in preparation for a long day. At least eighty public citizens who still believe in the purpose of jury trials ( or were afraid of facing criminal charges if they failed to respond to that letter in the mail) arrived at Judge John Gallagher's court to volunteer to serve to adjudicate whether the six defendants were guilty of "lodging" on the Courthouse steps last July and August as part of a peaceful protest against the Sleeping Ban in Santa Cruz.

Gallagher told juries "I expect this trial will last two weeks," which caused a concerned murmur through the crowd. He then told the court that they were in the middle of a "heavy-duty financial crisis" and that the court had had to "lay off 30 to 40 employees, has closed the misdemeanor court in Watsonville, closed the domestic violence court, and drastically reduced the drug court." Gallagher told jurors that he had to adjudicate "136 cases in one day."

Gallagher had the opportunity to throw the charges aside when Attorney and defendant, Ed Frey filed a motion to dismiss last January. Gallagher ruled that PC 647 (e) is NOT vague and overbroad and that the prosecutions could proceed. Judge Rebecca Connolly ruled essentially the same on March 4th in the case of Linda Lemaster, also charged with 647 (e). Lemaster will be tried later in May on the same charge, and, presumably, a different jury will be seated.

Assistant District Attorney Sarah Dabkowski for her part, picked up the gauntlet and filed subpoenas for the following witnesses* from the Santa Cruz County Sheriff's Office: Lt. Fred Plageman, Mattson, Matrargan, Reed, Santos, Butin, Buchanan, Burreul, Gidding, Habermeil, Hanks, Huntsman, Hurley, Kennedy, Mullet, Murphy, Nathan, Murrey, Peterson. From the Santa Cruz Police Department, she subpoenaed the following: Birnham, Conner, DeCampo, Guegelo, Forbus, Medina, Pendleton, Vasquez, Venetion, Vigil. She subpoenaed a witness from the Parks and Recreation Department to be named later, and a witness from the Homeless Services Center, to be named later. From the County administration she subpoenaed Dina Phillips for a total of 31 prosecution witnesses, all of whom will be paid for testifying.

* (Spelling may be approximate for some of these witnesses. My apologies to the reader)

Frey has subpoenaed Paul Brindel of the Shelter Project, Paul Lee, namesake for the Paul Lee Loft and founder of the Homeless Garden Project, and Monica Martinez, Executive Director of the Homeless Services Center.

She and her staff will also be paid, but Ed Frey will not be paid, despite serving the duty of a public defender for the other five homeless defendants.

Actually, defendant Arthur Bishoff has since obtained both housing and employment. Defendant Eliot Anderson also achieved housing and employment but has since been laid off from his job and lost his housing. Defendant Collette Connolly was sheltered for about a month at the Paul Lee Loft after Peace Camp 2010 was disbanded in October. She will not be eligible for those shelter services for at least six months now. She, and co-defendant, Gary Johnson, remain homeless. Defendant Christopher Doyon has not appeared in court and will be tried at a later date.

Police officers are paid for a four-hour shift if called to testify on their day off. If on duty, they testify in uniform, and do not serve on their beat during those hours, depriving the public of their actual services. Lt. Fred Plageman and Dina Phillips presumably will testify as part of their administrative salary.

When jurors learned they would not be serving on a jury to try a child molester, a rapist, a murderer, or an extortionist, but instead would be asked to determine whether a couple of homeless people "lodged" on the courthouse steps as part of a protest last summer, they rebelled.

A kindergarten teacher from Brooknoll Elementary School started the rebellion. "When I first came to Santa Cruz, I lived in my van for three years. During that time, I was hassled, arrested, and jailed. There is no way I could be impartial in this case considering the pain these people are suffering."

The next juror to object said "I grew up homeless and my dad was a veteran. I've been hassled and harassed, and I'm hostile. They make victims of people. They don't help them out. You can't take a homeless kid and give them a $225 ticket."

When DA Dabkowski asked " Do any of you believe this is a case that should not be brought to court," another juror raised his hand. "I have a strong respect for people's property rights, but I speculate that the people charged here had no other option. This is simply a case of right and wrong laws."

The next juror who objected said "I not only object, but I'm shocked really. I arrived not knowing anything about this case and now find you want to conduct a two week trial? And it's simply about a group of homeless people being where they're not supposed to be? What a waste of people's time. It's a travesty really, spending this much time and money on this here."

When Judge John Gallagher asked him if he could put his bias aside and render an unbiased decision he said "I'd just be sitting here, stewing, that I can't believe we are spending all these resources on this."

Potential juror #4 said "I'm honored to be here and to serve. However, I am not impartial. I feel this is a waste of time for the taxpayers. I tried to use my calculator to add up the expenses. And I'm upset we've opened up this much time on this particular case. You say it's criminal? Then why do the sheriff's spend so much time being giving tickets, just harassing people, especially my own kids, aged 17 and 18? And then not showing up when I need them. My storage locker was broken into and thousands of dollars worth of my things were stolen, and I never got anything back. You say this is criminal so perhaps there's more to it."

Another potential juror described her previous jury experience. " There was a break-in and we did reach a verdict, and I sat on the jury for a four-week trial on a rape case. But I'll say I'm already feeling some pre-conceived notions as I keep hearing this case is about illegal lodging, not what I keep hearing. It feels like we're getting away from that. Honestly, I don't think I can be unbiased."

Juror #36 was disillusioned with the whole process. "I testified in court once as a witness for the prosecution in an attempted murder case. And even though I was testifying against the defendant, the prosecutor was so aggressive in his tactics, I came to resent the whole court process. This case here shouldn't be taking place at all.

Potential juror #2 had experienced both sides of law enforcement. "I was saved by police at age 9. But then I've had relatives of mine pulled over by police and hassled for no reason at all."

Jury selection continues today. The trial is expected to last two weeks. Defendants face up to 6 months in jail and/or $1000 fine on each charge. Defendant Gary Johnson, who has the most charges, faces up to two years in jail for sleeping at the courthouse and at City Hall as part of a protest against Sleeping Bans.