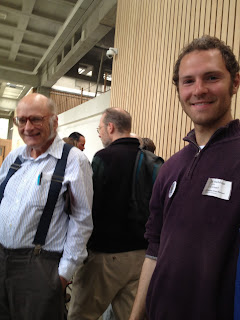 Two Occupy Santa Cruz members and  supporters of the Santa Cruz Eleven celebrate outside the courtroom following Judge Burdick's ruling to dismiss all charges against four of the defendants. Photo by Becky Johnson

NOTE TO READER:  I appreciate the in-depth coverage the Santa Cruz Patch has given this story, and this article is no exception. However, I must disagree with one claim printed in the article: that defendant Darocy "was seen vandalizing the bank." I beg to differ. As a defendant in the case, I've been privy to all the police reports, over 600 photographs, and 11 videos released by DA Bob Lee on youtube. In addition, I attended both preliminary hearings in their entirety. At no point was any evidence of Alex Darocy being "seen vandalizing the bank." Patch editor, Brad Kava was very critical of Darocy in an editorial he published on March 16, 2012 but stated that on November 30th he personally saw Darocy " put up cardboard to block the windows." I really don't think that qualifies as vandalism and Kava should say what he means rather than to inform his readers by innuendo.  --- Becky Johnson, Ed.

Judge Paul P. Burdick said there wasn't enough evidence to bring the four protesters charged with trespass and conspiracy to trial. Prosecutor Rebekah Young says she will refile on two of them.
ARTICLE FOUND ONLINE HERE.

Santa Cruz, Ca. -- A Santa Cruz judge Wednesday threw out charges against four Occupy protestors accused of trespassing and vandalizing the vacant Coast Commercial Bank at 75 River St. last November. Judge Paul P. Burdick said there was no evidence linking the four to the crime of trespass or to a conspiracy to commit felony vandalism at the bank that reported $20,000-$22-000 of expenses cleaning up electrical fixtures, wiring, graffiti and damaged furniture by protesters who held the building for three days.

Burdick also said that the testimony of Santa Cruz Police officer David Gunter who was the lead investigator on the case "was not credible." The judge said the officer testified in one hearing that he was present in the bank on Dec. 2, but in another hearing said he wasn't.

"I discharge all four defendants on all counts alleged," Burdick said, after issuing an earlier warning that he would have anyone who made outbursts taken from the courtroom.  The defendants quietly celebrated outside the courtroom Wednesday morning.

"I feel relieved, very relieved," said Grant Wilson, who faced two years in jail and $22,000 of damages if convicted. "It's very unsettling to be falsely charged with serious crimes. My picture doesn't reflect how happy I feel."

This was a preliminary hearing to decide if there was enough evidence to bring Wilson, Franklin Alacantara,  Edward Rector and Cameron Laurendau to trial.

Prosecutor Rebekah Young said she would refile charges on Alacantara and Laurendau based on evidence she would provide by other Santa Cruz officers, Sgt. Mike Harms and Sgt. Mike Hedley.
The prosecution's case had no direct evidence of these four committing vandalism, nor could it even prove they were in the bank after being told to leave.

Two of the other 11 charged in the case were bound over for trial earlier. Alex Darocy, who claims to be a journalist but was seen vandalizing the bank and harassing actual journalists and Bradley Stuart Allen, whose published photos of the takeover were used as evidence against him will be tried May, 29.

Allen's claim that he was covering the event for independent news media was backed up by the ACLU and the Society for Professional Journalists. Patch will follow up the story later today.
Posted by Becky Johnson at 2:35 PM