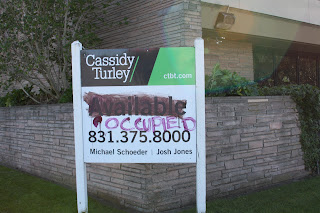 NOTE TO READER:  Judge Paul Burdick refused to allow Assistant DA Rebekah Young to use photos which were never provided to the defense. Despite over 600 photos being turned over to defense attorneys, none of the photos Young intended to use in court on Monday were among them. Defense attorneys also sought video footage shot from the police car of Officer William Winston and Officer Forbus, mentioned at the Preliminary hearing on March 13th for Alex Darocy and Bradley Allen, but yet to be produced. Also, footage of defendant, Cameron Laurendau was referred to by Det. Guntner on the stand, but had not been turned over to Cameron's attorney despite being 4 and half months AFTER the crime and over two months since the indictments were handed down. Interestingly, Guntner testified that on Dec 2nd when he accompanied Officer Hedley in posting "no trespassing"notices, that none of the officers spoke to the defendants.  Yet, in the video posted by DA Bob Lee online on youtube, you can clearly SEE a police officer discussing something with defendant Laurendau, after he's exited the building (and within 2 minutes of officers posting the notice), an act which Guntner testified "never happened." Inexplicably, the clip has been stripped of its soundtrack so the public can't know what the content of that conversation was.  The preliminary hearing continues on Wednesday at 10:00AM in dept 6.  The remaining defendants, myself included, face a preliminary hearing on May 29th at 1:30PM in Dept. 6.  --- Becky Johnson, Ed.

SANTA CRUZ - A judge declined Monday to issue an immediate ruling in the case of four people charged in connection with the takeover of a former bank last year to allow more time to research the legal issues involved.
"At first blush, I think the people may have some problems with these four defendants," Judge Paul Burdick said, after hearing the prosecution's evidence in a preliminary hearing Monday.
Cameron Laurendau, Franklin Alcantara, Edward Rector and Grant Wilson are among the 11 people charged after the takeover of the former Wells Fargo Bank at 75 River St. in late November and early December. They face felony charges of conspiracy and vandalism along with two misdemeanor counts of trespassing.
Detective David Guntner of the Santa Cruz Police Department, who led the investigation into the nearly 72-hour takeover, testified about the evidence, primarily photographs, used to identify those charged.
"Who vandalized the bank?" Alcantara's attorney, Jesse Ruben, asked.
"I don't know," replied Guntner, who said he viewed video of Alcantara entering and exiting the bank, but he didn't know how long he remained inside.
Those involved in the bank takeover left peacefully after nearly 72 hours of negotiations with police.
Burdick said the case posed a number of legal issues, including a lack of evidence proving the four defendants entered the building after being requested to leave. He ordered all four defendants, their attorneys and prosecutor Rebekah Young back to court Wednesday, when he's expected to issue a ruling on whether to hold the four to the charges.
Supporters of the so-called Santa Cruz Eleven have said the District Attorney's Office is prosecuting the constitutional right to protest. In a letter published in the Sentinel earlier this month, the American Civil Liberties Union's Santa Cruz County chapter called for the charges to be dismissed.
Last month, a judge dismissed the vandalism charge against two other defendants, Alex Darocy and Bradley Allen, but held them to charges of felony conspiracy and misdemeanor trespassing. The two, whose attorneys say they were at 75 River St. acting as journalists, are scheduled for trial next month. A preliminary hearing for the other five defendants is still pending.
Follow Sentinel reporter Jessica M. Pasko on Twitter @jmpasko96
Posted by Becky Johnson at 7:11 AM