The Santa Cruz Eleven are charged with 23 felonies and misdemeanors for their presence at a peaceful occupation of a long-vacant bank, leased by Wells Fargo Corporation. A petition urging DA Bob Lee to dismiss the charges can be found here. 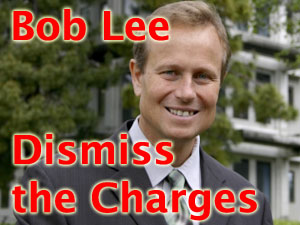 Some of those who signed the petition have also left comments. Here is a selection:


I think that given the circumstances, and the spirit of solidarity that these protestors demonstrated for a cause that supports our ever increasing population of poverty stricken Americans. It has become important to tolerate different nonviolent forms of protest. These people were protesting the fact that the Banking system was bailed out with money contributed by the Tax Payers of the United States, yet they have foreclosed on many working citizens in our neighborhoods. I think occupying an empty bank fits right into this theme, and did do not much damage or hurt anyone. By dropping these charges, it will send a message that we value the people of our community that are trying to make a difference for the poor working man.
Allen Noonan, CA

I agree with the actions of non-violent activists and support their actions regarding the bank protest. It is unfair to target certain individuals and punish them, for speaking for the majority of Americans. Please see that the case is thrown out.
Mr. Nick Hendricks, CA

Our local culture is inclusive and forgiving - UCSC named themselves City on a Hill and professors consider Santa Cruz The Leftmost City. Eyes are on us, even iPhone's Siri recognizes Santa Cruz. How about a less moralistic, more pragmatic resolution? The charges themselves demonstrate the county's sense of affront. It's enough. Let's dismiss all the related charges and cases and not file any more!
Sylvia Caras, CA

Felony charges are unjustified for trespassing on a vacant property. Considering that the sincere purpose for those involved was an act of political free speech and that many others were also there and NOT charged any charges at all are unjustified.
Mr. Joseph Vella, CA

Dear Sir, During this time of the Occupy Movement, as you know, there have been thousands and thousands of peaceful demonstrations WORLDWIDE. These brave patriots here in our city of Santa Cruz made a valid point with their Occupation of the vacant building, leaving once that point was made, hurting no one whatsoever. There is a time and a season for these demonstrations and it was exactly when needed. These courageous people do not need to be in prison, they need to be heard; they echo the voices of millions on this planet we share and call HOME. In this day and age of war and occupation, the points to be made sometimes need to be theatrical-- as in these people never intended to lay down and stay there for good, only stand up peacefully for the beliefs of so many over the entire globe. Please lower or drop the charges. Sincerely, Patricia Wieder, a mom in Soquel.
Ms. Patricia Wieder, CA

Stop the war on journalists and activists and start attacking the problems we are pointing out!
Ms. Denica De Foy, CA

This is a farce, and a gross miscarriage of justice. It is transparently obvious that the DA is trying to "make an example" of the few most outspoken members of the community in an attempt to suppress dissent. The prosecution of this case is clearly at odds with public interest, and charges should be dropped immediately!
Mr. John Yerger, CA

This is oppression of the worst sort. Surely you know that activists vote.
Sheila Connell, CA

These are not felonies, and trying to make an example of these patriotic individuals is nonsense, and can only backfire in the long run.
Kyle Griffin, CA

These felonies are heavy-handed and unjust. Some of these folks who were charged were simply journalists covering the occupation of this long vacant bank building. It isn't right to make examples of them, as 200-300 others had entered the building over the 3-day occupation.
Mr. Spencer Wilkinson, CA

I would feel safer as an American citizen if Santa Cruz County's District Attorney's office were proceeding with greater care for our Nation's and state Constitutions this matter.
Ms. Linda Ellen Lemaster, CA

It is absurdly obvious that the DA is trying to make an example of these people because they are intelligent enough to be critical of the police department, and utilize journalism to raise awareness and create community dialogue. This is extremely valuable to the people of Santa Cruz, and is a protective right.
Courtney Hanson, CA

Good Lord, what has this country come to, when journalists not of some people's choosing are charged with felony when covering a human protest?
Lydia Blanchard, CA

Please drop the charges! These allegations are ridiculous and a poor use of governmental, local funds!
Marisol de la Luz, CA

To the District Attorney: What, exactly, are your criteria for PICKING ON PEOPLE???
Ms. Linda Rosch, DC

Judging from the preliminary brief including the pictures and videos, the Santa Cruz DA HAS NO case.
Mr. Leigh Meyers, CA

I don't know why Santa Cruz is wasting money on this case, in clear violation of the defendants' constitutional rights. There are so many things our city and county needs, and yet time and money are spent on these spurious cases. Let these people go!
Dorah Rosen, CA

My wish would be for justice being distributed equally for all. Selective prosecution with political motives does not align with my notion of what a just judicial system would look like.
R. Garimo Pape, CA

We are a nation born on the principles of freedom. Let's stand up for that.
Mr. Charles Feldman, RI

Solidarity! Thanks for putting your bodies against the gears of the machine.
Kari Sprung, MN

Please stop harassing these people. The occupy movement is attempting to take back the government for the people of whom you are a part of. Journalists have an obligation to cover the peoples' news. Stop acting like some dystopic totalitarian state agency.
Mrs. Lynne Heller, CA


"I would like to add that this entire thing is grossly unfair and these people are mostly vegetarians and would not hurt a fly. Prosecuting them for such a minor thing is completely ridiculous."   --  Blind Bear  Mar 29 2012

Posted by Becky Johnson at 8:26 AM