A closed bank put to good use 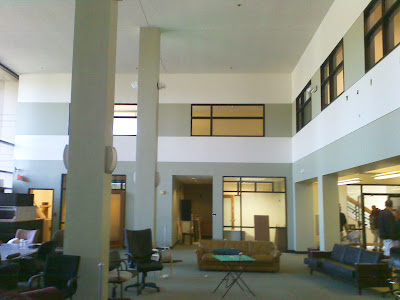 NOTE TO READER: This article was published by SocialistWorker.org last December (but this is the first I've seen it.) I like the article a lot, but I'm not aware that protesters "tore down no trespassing signs." It's my understanding that the building was not properly posted with "No Trespassing" signs prior to the occupation. Also, there is no parking garage for the building. Perhaps the article refers to a large parking garage nearby. --- Becky Johnson, defendant

A closed bank put to good use

IN THE middle of a nationwide crackdown on the Occupy movement and facing threats of police harassment and the cold weather, a group of activists in Santa Cruz, including both Occupy Santa Cruz community members and University of California Santa Cruz students, organized the occupation of a former bank located at 75 River St., successfully defending it for four days, starting from Wednesday, November 30. 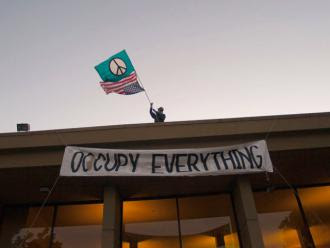 The bank, formerly the Coast Commercial Bank, has been empty and unused since it was consolidated into Wells Fargo's empire and closed in March of 2008, one of the many unused, vacant offices and commercial buildings in Santa Cruz which stand as monuments to the depth of the economic crisis and the contradictions of a system which maintains massive homeless and unemployment amid foreclosed homes and vacant offices.

THE SEIZURE of the bank was promoted and built in advance in an open and democratic way. Although the tactical restrictions of a building occupation made it necessary to conceal the target, the event was promoted as a picket of banks and an attempt to reclaim a foreclosed property.

By presenting the action in this way it was possible to build momentum around the action in advance and do broad outreach, including announcing the march to student occupiers at the Hahn Student Services building at UCSC on November 28. Although the crowd gathered for the initial rally at the Occupy Santa Cruz encampment was comparatively small--about 100 people--most knew what to expect from the action and were prepared to defend the space.

The group assembled at 2:30 p.m. and then marched with chants and a mobile sound system to picket outside a local branch of Chase Bank before moving to the target, located next to a branch of Wells Fargo.

As protesters entered the bank, flyers were passed out announcing the action and declaring that "Spaces like this one, reclaimed from the wealthiest 1 percent, are places where we can seek redress to our grievances. In the years to come, this space will be used to organize humanitarian efforts, house a library and provide a forum for discussions." 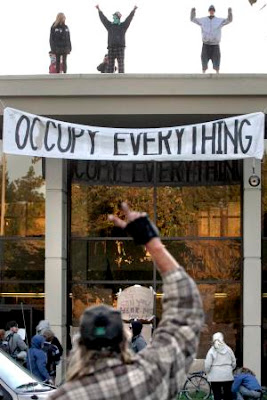 Occupiers opened the doors to the public, no trespassing signs were torn down, and furniture, bedding, food and other supplies were brought in to begin transforming the bank into a home. Almost immediately, about eight police officers attempted a first sortie to shut down the occupation--however, as the crowd outside linked arms and rallied in defense, the cops retreated temporarily.

A banner proclaiming the slogan "Occupy Everything"--an idea which first made its appearance in 2009 at an occupation at UC Santa Cruz--was hung from the roof. A real estate sign claiming the space as available was painted over to say Occupied. Signs were hung up with slogans such as "Capitalism left this place to die. We're here to bring it back to life," and "This bank occupied our lives...Now, we occupy it!"

After a couple hours, police started to block traffic from passing in front of the occupied bank, and it became clear they were massing in the parking garage of the building. Reconnaissance by protesters revealed that police had set up a lookout post out in a second story office in the closed Wells Fargo Bank next door, from which they were spying on protesters and preparing to coordinate the coming assault.

The assault came rapidly and unexpectedly at 6:24 p.m. Occupiers were caught off guard as about 30 riot cops attempted to seize control of the entrance to the building and push back the protesters. Although the police succeeded in preventing the doors from being closed, barricades in front of the door stopped them from gaining entrance.

Although initially taken off guard, the crowd, which by now had swelled to about 150 people outside the building, with more than a dozen inside the bank, reformed itself and surrounded the cops. The front lines of the protesters outside linked arms and advanced on the police. After a 20-minute standoff, the riot police, outnumbered and outflanked, began to retreat and had to ask the crowd for permission to leave.

The mood among the crowd was a surge of exhilarating confidence. Facing a coordinated police assault, protesters had succeeded in turning back riot cops, and even forcing them to ask permission to leave.

In the aftermath of this victorious confrontation with the police, protesters worked on expanding the defenses of the occupied space. Rocks were spread out to make a police advance in formation more difficult. But attempts to reinforce the defenses within the building didn't change people's understanding that the number of people mobilized within and without would be the decisive factor in keeping the occupation going.

Around 8 p.m., a General Assembly of around 75 people convened. Several speakers eloquently expressed the power of the example this action could set for the Occupy movement, with one speaker saying "I want to be a part of history" and exhorting others to join in the process of moving the Occupation movement inside, into a bank, which presents the perfect target.

Around 50 people slept in the occupied bank overnight, expecting a second police assault to come at any moment. However, the demonstration by protesters outside earlier, and the political climate created by the widespread popularity of the movement around the country, apparently was sufficient to stop another attempt by police to break up the occupation. After a mostly sleepless night, the occupiers awoke to to the task of further publicizing the takeover and gathering more people to its defense.

WHILE ACTIVISTS mobilized and did outreach to the campus and community, the local elite mobilized their own campaign through the media. Although coverage at the beginning of the occupation was comparatively objective, as the occupation continued, the local media, in particular the Santa Cruz Sentinel, were transformed itself into transmission belts for the intimidating threats of the Santa Cruz Police Department.

The police threats and statements were revealing. In response to concerns from other property owners with vacant property, Police Chief Kevin Vogel said on Friday morning, two days after the occupation began, "You can always count on police to kick people out."

Early on Saturday morning, in an article in the Santa Cruz Sentinel, Vogel threatened protesters with the possibility of felony vandalism and even burglary charges. Deputy Chief Steve Clark said that among those inside, "Mothers are going to jail. Babies are going to Child Protective Services."

The media campaign wasn't limited to threats by police. One property manager, Darius Mohsenin, threatened a tenant supposedly involved in the occupation, declaring, "If he's not going to respect the rights of this property owner, then I'm going to evict him."

The occupation held strong over four days, functioning as a community center and a rallying point for the movement. However, as protesters faced a combination of physical exhaustion, escalating police threats and difficulty in mobilizing sufficient supporters to defend the building over a longer period of time, they decided on a tactical withdrawal. Demostrators cleaned and vacated the building on Saturday night.

Although the occupation has ended, the occupiers in a statement released Saturday night emphasized the gains the action has made and the tone it set for the movement:

Though our establishment in this physical space was unfortunately brief, our goals were in part successful: to show that through courage, determination and action, we the disenfranchised can seize our dreams. The case for community self-empowerment stands stronger than ever. For every occupation repressed, a dozen will rise in its wake. This is just a beginning

Posted by Becky Johnson at 9:40 AM