It's not the settlements, stupid 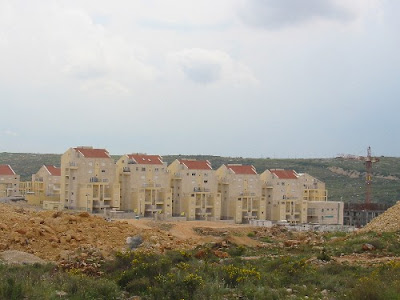 Photo of Modi'in Illit incorporated 2008 in the West Bank, Israel.

NOTE TO READER: The Settlements issue has been a thorny one, and not easily understood by bumper sticker rhetoric. President Obama's speech in Cairo threw the issue on the front burner, and angered Jews due to his erroneous comment that Israel's settlements violated agreements made with the United States government. They didn't. But here is Sarah Honig with a brilliant article which highlights the stupidity of blaming the conflict on Jews living in Judea. ---Becky Johnson, editor

FROM: "Another Tack: It's not the settlements, stupid"

Without historical context there can be no real understanding of existential issues, certainly not of essential continuities. That's why those who seek to obfuscate and skew do their utmost to erase telltale fundamental perspectives and present whatever they focus upon as cogent isolated concerns.

Case in point: US President Barack Obama's fixation on settlements, whether they be a collection of squatters' makeshift lean-tos on a stony hill in the middle of a barren nowhere or entire populous urban quarters of Jerusalem.

The real issue is a layer deep beneath surface palaver. It's a layer which Arabs implicitly understand, which Jews pretend (or prefer) not to understand, and which Obama righteously denies. To paraphrase what Bill Clinton hectored during his first presidential campaign: "It's not the settlements, stupid."

Obama hints at it when he admonishes against creating "new facts on the ground" ahead of the deal he proclaims he's about to concoct. Peace is feasible providing Israelis effectively stay inanimate and refrain from altering reality beyond the non-border (1949's armistice line, a.k.a. the Green Line). Otherwise they jeopardize Obama's magic remedy to all that ails the region but which thus far eluded cure by lesser healers than himself. His unspoken apparent assumption is that whatever betokens Israeli/Jewish life and vitality perforce undermines harmony and bliss. Bottom line priority - weaken Israeli/Jewish interests.

THIS HAS been the Arab subtext since the very advent of Zionism, though at different intervals the casus belli assumed different facades. In all instances the pro forma grievance was that Jews were "changing facts on the ground," just as now.

On occasion, as currently, the outcry centered on settlements, or more specifically on land purchases. (Jews weren't always accused of robbing Arab land. Sometimes their crime was buying stretches of wasteland.) At times it was immigration.

Often, it was both, as in the days of the infamous White Paper, published by Britain just months before the outbreak of World War II, when the Holocaust was about to be kick-started. Germany's Jews were already shorn of citizenship and stateless. Hitler's threats were well recorded, shouted in the world's face and hardly kept a secret.

Besides its draconian curbs on Jewish land ownership, the Neville Chamberlain government's White Paper also set a limit of 10,000 Jewish immigrants annually for a five-year period. It magnanimously allowed an additional 25,000 quota for the entire five years to allow for "refugee emergencies." Any post-1944 Jewish entry would necessitate Arab permission.

It must be recalled that Jews were at the time fleeing in all directions to escape Hitler's hell. The White Paper encompassed all the goodwill the international community could reluctantly muster, lest "changes on the ground" occur that would rile the Arabs in and around the Jewish homeland.

In his day Hitler tauntingly invited the world's democracies to take his Jews, if they were so fretful about them. He knew that for all their high-minded rhetoric, these countries wouldn't accept his provocative challenge. After 1938's Anschluss, their representatives met in Evian-les-Bains, on Lake Geneva's French shore, to decide what to do with Nazism's desperate victims, who were pounding on their gates in search of asylum. They never even called them Jews, lest they incur the fuehrer's wrath.

IT TURNED into a great Jew-rejection fest. Britain bristled at any suggestion of allowing Jews into Eretz Yisrael, mandated to it to administer as the Jewish national home. Progenitors of today's Palestinian terrorists made sure endangered Jews wouldn't be sheltered, and his majesty's government appeasingly assented. The vast empty spaces of Canada, Australia and New Zealand were likewise off bounds. American humanitarianism consisted of tossing the undesirable hot potato into the international arena, because the Jews weren't wanted in the land of the free either.

Indeed, FDR toyed with the notion of shipping German Jews to Ethiopia or Central Africa. The UK favored the jungles of Venezuela or Central America. Mussolini changed direction northward. Instead of exposing Berlin's urbane Jews to the rigors of the tropics, he opined that the Siberian arctic might be a preferable hardship.

The competition was on: who'll suggest a more remote and less hospitable exile in which to dump those whom the British Foreign Office shamelessly labeled "unwanted Jews." The motivation wasn't much more beneficent than Hitler's initial choice of Madagascar.

During all that time, it needs to be stressed, immigration into British mandated Eretz Yisrael hadn't stopped. Only Jewish immigration was targeted and impeded. Arab immigration continued unhindered. Itinerant Arab laborers streamed here from the entire Arab-speaking world - from the Maghreb to Syria. The Jews created what was dubbed locally as "prosperity." Arabs drifted to partake in it. But nobody objected. They were counted as natives. The UN actually recognized as "Palestinian refugees" any Arabs who sojourned here two years prior to 1948. Much of the Arab population on Israel's Coastal Plain, for example, is originally Egyptian and arrived with British acquiescence.

Hence the Mandate-era recorded a population explosion in some Arab villages, ranging quite unnaturally between 200 percent and 1,040%, according to Prof. Moshe Prawer's research into Arab migration here from Lebanon, Syria, Egypt, etc. The Brits and their allies didn't consider the Arab influx as "changing facts on the ground," possibly because enlightened Jews didn't riot.

The bete noire that once was aliya is today called settlement. But intrinsically the two are one and the same - antagonism toward Jewish presence. The Jews are anathema, as is any habitat for them. If both are curtailed then Jewish existence is undercut. That was and still remains the Arab endgame aim.

Today's unofficial settlement freeze won't satisfy Israel's supposed peace partners, just as the British White Paper proved insufficient for their 1939 forebears. The ultimate White Paper goal was the creation of a single binational state with power-sharing according to the proportion of Jews to Arabs as would exist in 1949. Restrictions on Jewish immigration would preclude any "changes on the ground" until then - just what Obama purports to prevent with the ban on Jewish construction in Judea and Samaria.

The Arab Higher Committee rejected said White Paper, demanding "a complete and final prohibition" on all Jewish immigration and unequivocal absolute repudiation of the Jewish national home. Translated into today's diplomatic parlance, this is equivalent to "the unconditional end to all settlement activity" and the refusal to recognize the right of a Jewish state to exist.

What was is what is. It's just not about the settlements.
Posted by Becky Johnson at 4:20 PM