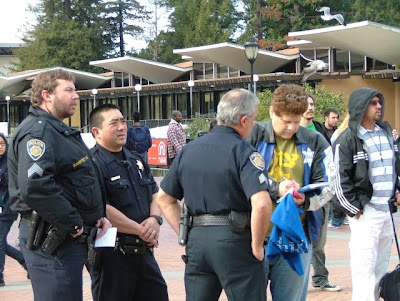 Photo of Lee Kaplan as a counter-protester at UC Berkeley February 6, 2008

NOTE TO READER: My colleague, Lee Kaplan, has written dozens of articles on the Israeli-Palestinian conflict. Kaplan and I produced over a dozen television programs on the topic as well. Kaplan has been to Israel twice, and is the Editor-in-Chief of Dafka.org.

Mateo Alaluf[1] identifies himself as a Jewish professor living and working in Brussels, whose specialty is Labor Studies, by which he means communist ideology. As a Marxist Professor residing and teaching in Europe, Alaluf has made a career of contributing to the calumny of Israel supposedly being the racist capitalist exploiter of Arabs. Mateo's writings lend legitimacy to the unremitting attacks on the Jewish state emanating from Europe.

Like most anti-Semites today, Alaluf ritually insists to any audience that he is not anti-Semitic; he just promotes boycotts of Jews in Israel and helps foment and provide intellectual cover for hatred of Israel's Jews from Europe. He is not out to harm other Jews in Europe where he lives, he claims, but only those pesky Jews who live in a Jewish state and defend themselves.

According to Alaluf, as translated from his French article, "Judeophopia,"[2]

"In a strange concurrence for the victims, there are those who don't hesitate to align themselves with the Holocaust as contributing to the rise in anti-Semitic acts as opposed to the crimes of colonization and daily racism which should be the object of concern. Of most concern, the other forms are lost from view. These are pushed to the rear of the media scene which is rather occupied by the war led by the Israelis against the Palestinians and that of the United States against terrorism."

In other words, Alaluf takes exception to the world's concerning itself with the Holocaust and feels the world should be more concerned about defeating the Jews living in Israel and their Jewish nationalism, which he redefines as "racism." He believes recent rises in anti-Semitism in Europe and elsewhere have more to do with capitalist countries distracting the media, by means of "intentional" wars made against the Palestinians by Israel and by America against al Qaeda and its terrorism.

He also feels the media in general give less emphasis to Islamophobia than Judeophobia and thus subject the Arabs more than the Jews to racist interpretations. He bases this on an example of a French Neo-Nazi who originally planned to attack Muslim immigrants in France with an ax, but decided instead to attack a Jewish man, because he felt it would generate more attention for his cause. At the University of Brussels, that evidently constitutes scientific evidence and proof. Here's Alaluf scholarship, translated from the French:

"It is necessary to recall that in witnessing the mobilizations of all types of the media, and the same sick results for the victims, 'arabphobia' (or 'islamophobia') welcomes less the idea of suffering than 'judeophobia.' As proof, there is the story of Michael Tranchon, a.k.a. Phineas, a young, unstable Frenchman, fascinated by the extreme Right. He sought to be an executioner for his cause. He at first decided, in some sort of natural way, to try and attack an Arab with an ax. But faced with a slight audience because of this act in the Media, he decided to attack now Jews in order to gain greater notoriety."

This ludicrous interpretation of current events is in itself anti-Semitic. It blames the Media for exaggerating anti-Semitic events rather than justifying them as being caused by Israel's existence. One has to wonder if Mateo Alaluf has ever read the Hamas Charter that calls for the extermination of world Jewry, or if he knows about the Protocols of the Learned Elders of Zion, both documents being standard texts used by Arab propagandists and their Marxist apologists today. Alaluf insists that Jews themselves are to blame for anti-Semitism.

In classic communist manner, Alaluf simplifies things even further, by dividing the world into "exploited" workers and the "power elite" (run by capitalism, to which Israel belongs, being a western-style democracy). He has a Manichean approach to issues surrounding Israel, using classic Stalinist thought, with Zionists being the bad guys, a part of western "imperialism." Alaluf is such a passionate socialist-communist that he set up a foundation on campus in the name of Marcel Liebman,[3] a notorious communist teaching at the same campus, who also espoused anti-Israel ideals. Liebman too regarded tiny Israel as an "extension of that power elite" and the oil-soaked Arabs as the proletariat.

Never mind that Israel was founded by a host of socialists, such as the kibbutz movement.[4] Alaluf prefers to inist to his fellow Europeans that Israel is really a colonial enterprise of the capitalist west and that classical anti-Semitism doesn't really exist in Europe, that it is nothing more than the understandable response of sensitive and progressive Europeans to Jewish racism against the Arabs.[5] In Mateo Alaluf's Marxist world you would never learn that Israel has an Arab population of 18% enjoying equal civil rights, and that Arabs are the ones who practice apartheid against Jews[6] and other Middle East minority groups.

What further fascinates this writer is that since the 1970's Alaluf has chosen to make undocumented workers[7] in Belgium his passion. The fact that Jews were without a homeland for 2,000 years and were similarly "undocumented" does not bother him a bit. The rights of illegal immigrants in Europe are sacrosanct. but not the national rights of persecuted Jews do not exist.

Alaluf signed a petition[7] in support of boycotting Israeli academics and institutions because of Israel's Operation Cast Lead, claiming to be part of a gang of "Progressive Jewish Peace Activists." The petition in question complains about 1,300 Arabs killed by the IDF but does not mention that almost all of those were armed terrorists and that the rate of civilian casualties was far lower than in the NATO operations in Yugoslavia or the allied operations in Afghanistan. At the same time, the petition does not mention the more than 8,000 missiles fired into civilian population centers in Israel starting in 2000.

True to form, Alaluf also signed a petition[8] to boycott Israel and in support of German anti-Semite politician Hermann Dierkes, insisting yet again that when Europeans engage in selective boycotting of Israeli and Jewish institutions it is not anti-Semitic. Dierkes, a leftist politician in Germany, called for support of the Palestinians in Gaza, urging the boycott of Israeli goods at the World Social Forum.[9] Dierkes considers Israel's military response to nine years worth of missiles raining down on its schoolchildren's heads as "collective punishment," sees nothing wrong with trying to assist in the economic starvation of Israel's entire population, including its hildren. Dierkes, like Alaluf, takes no notice of the Hamas Charter, which openly calls for the extermination of the world's Jews. Even Dierkes's colleagues in the German government declared Dierke's actions anti-Semitic, noting that boycott and divestment were the first anti-Semitic acts by the Nazis against the Jews in 1933.

That petition was actually put together by anti-Israel, pro-divestment ISM activists in the United States, the "US Campaign for Academic and Cultural Boycott of Israel," funded in part by the Saudis. It was then circulated to Europe where Mateo Alaluf leapt to Dierkes' defense,[10] declaring Dierkes to be no anti-Semite, and supporting the boycott himself. Alaluf took the lead and was personally involved in gathering the signatures[11] for the petition from all over Europe.

Alaluf also works in cooperation with the Boycott, Divestment and Sanctions Movement in the United Kingdom, lending them his name and support as an academic, urging boycotts of Israeli academicians and Israeli businesses. Alaluf also signed a petition in year 2000 claiming along with other European Jews that the Palestinian "resistance" was "legitimate". The petition[12] he signed, translated from the French stated, "We estimate that the combat by the Palestinian people for national independence is legitimate."

The absurdity of the above statement is that the Oslo Accords sought to grant national independence to the Palestinians by peaceful means and Israel even deported 8,000 Jews from Gaza to affect that. It is the Palestinian leadership, both Fatah and Hamas, that refuses to recognize Israel's right to exist and that insists there can be no Jewish state according to their own charters. Alaluf, by endorsing such a petition, literally supported violence against Israel's Jewish and other citizens as perfectly all right.

There is something sick and twisted about a sociologist who is supposed to study human behavior to make life better for everyone, so blindly endorsing a movement that repeatedly states that Israel as a Jewish state has no right to exist and encouraging that its population be starved, ostracized, or even killed as a legitimate form of political expression, all the while using his Jewish ancestry as a cover to deny anti-Semitism. But then again, Alaluf, as a Stalinist Marxist obviously feels he must engage in the same anti-Zionist groupthink as during the Cold War, with America to blame for everything and Israel as America's surrogate in the middle east. What is sad is he has the ears of many people in Europe who may know no better.

Lee Kaplan is an investigative journalist. He is also a regular columnist for Front Page Magazine, the Israel National News and a senior intelligence analyst and communications director for the Northeast Intelligence Network. He can be reached at: leekaplan@worldnet.att.net

Posted by Becky Johnson at 8:23 AM