Pesticides and Fertilizers seized in Save Our Sierra 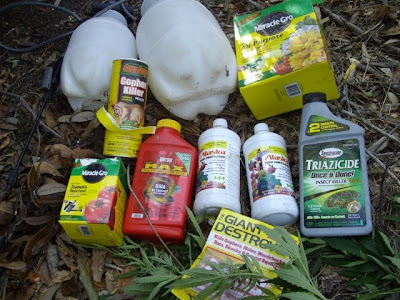 Photo: Pesticides, fertilizers, rat and gopher poisons seized in the DEA and Fresno County Sheriff's in their two-week long, marijuana eradication effort in June of 2009 in which they claimed they destroyed $1.6 billion worth of crop.

Santa Cruz, Ca. -- Not only does the DEA and law enforcement up and down California claim that our forests and parkland have been invaded by "Mexican" "Drug" "Cartels" growing massive amounts of pot in our state forests and causing environmental damage. Above is a photo of the fertilizers, pesticides, rat and gopher poisons confiscated from the two-week operation that busted 88 individuals.


By contrast, the Fresno "Save Our Sierra" operation conducted by the Federal Government's Office of National Drug Control Policy in conjunction with local law enforcement which fielded over 300 law enforcement personnel to eradicated pot grows in remote, mountain areas. Determining acreage in these busts is difficult as authorities prefer to give the number of plants seized rather than acreage. However, one can use the formula of 1/2 acre = 10,000 plants to determine the actual acreage under cultivation. So the 330,000 plants seized in Save Our Sierra were on 16.5 acres.

In the video below, Drug Czar John Walters in 2008 claims that violent Mexican Drug Cartels had been growing in the rugged hills near Visalia, CA. Note the tiny amount of evidence of these pesticides, rat killers, and chemical fertilizers.