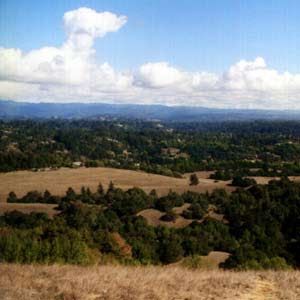 "The Pogonip" photo by the City of Santa Cruz, Ca.

Santa Cruz, Ca. -- If I were the ultimate puppet mistress of Santa Cruz (sort of a female version of City Manager Dick Wilson), when I enacted a government policy which displaced up to 300 people by some decree, I'd create sanitary and safe areas for them to go. For example, a shelter was set up at San Lorenzo Valley High School for the displaced residents of the Martin Fire in 2008. This year, the displaced residents of the Lockheed Fire were first placed at Vintage Church on Mission St. in Santa Cruz, and many were later placed in area motel rooms or with area residents to wait out the fire.

Personally I think the statements made by Parks and Rec personal at the SEIU Hall a few years back were exaggerated. I don't think there are 300 illegal campers living in the Pogonip. But 100 or more? That I could believe. And if Ranger John Wallace has closed the Pogonip by decree, which now displaces homeless veterans, infirm seniors, the able-bodied but unemployable due to bad dental work, the disabled who are awaiting the two-year process to get their benefits, the released "back into society" returning criminals from their junkets in California's prison system, the runaway teenagers escaping abusive parents and step-parents, and foster parents, and whoever else is out living under a bush in the Pogonip, then I would damn well put up a corner of a Park or a warehouse, or a closed school building or SOMETHING for them.

I'd have the Red Cross get down there too and take care of their sudden need for food, shelter, and medical care. But what do we get here instead? Ranger Wallace pulls out the evil bugaboo about "heroin use" as if that's a new thing, as some kind of phony "fire danger." I'm not saying there isn't fire danger everywhere in our wildlands. There is. But what we have here is Ranger Wallace capitalizing on people's fears of fires by raising the specter of "what if." Then he takes his "what if" and turns it into a real disaster for homeless people. As Puppet Mistress, I would cut his strings.
Posted by Becky Johnson at 4:30 PM